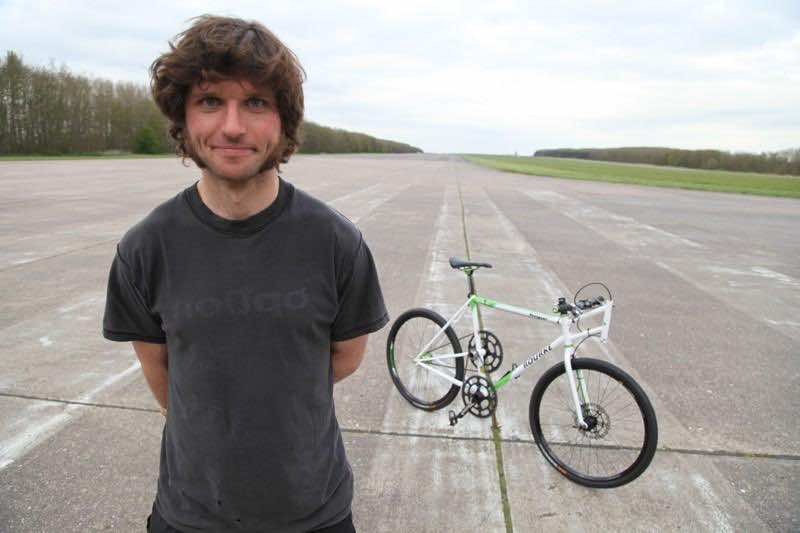 Jason Rourke, a 42-year old bike shop owner, spent 10 days and £5,000 building a specialized mountain bike that can go over 110 mph. Commissioned by motorcycle racer, Guy Martin, Rourke built and then Guy Martin rode his bike straight into the record books at an astonishing speed of 112.94 mph. The previous record for a pedal-powered bicycle was 83.13 mph, set by Dutch cyclist Sebastiaan Bowier in September 2013. The record shattering attempt took place at Pendine Sands in South Wales. Guy Martin was towed to a speed of 50 mph and then released, going on to a speed of over 112 mph on his own. Jason runs Brian Rourke Cycles with his father whom the shop is named after, he tells the story in the following words, “The funny thing is, my dad Brian was contacted by the people who set the current world record asking if we could help to build the bike. Due to various work commitments we didn’t take it on, so when we got a call from the producers in February about another attempt to break the record, we couldn’t say no.” The main priority, Rourke claims, was not making the bike lightweight but rather strong enough to handle the speed, which meant strengthening the frame. Thicker tires were also installed since more grip was needed. Most components were made specifically for the purpose of breaking the speed record making the bike not only unique but priceless. Rourke says he got a call asking him if he knew anyone who owned a truck capable of 120 mph, had engineering experience and could drive the truck. Rourke said he was able to do all three and met up with Guy Martin to carry out the insane project. He says that he was fully aware of the risks involved, but it sounded fun and he enjoyed the challenge, which led him getting his name etched in history.