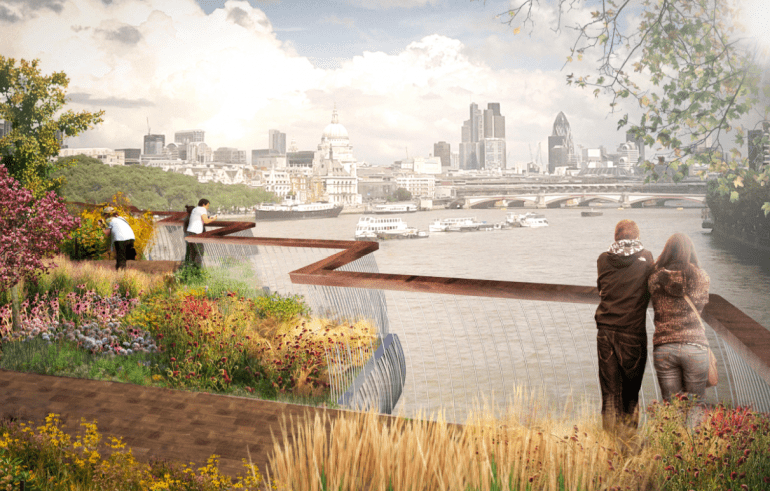 Great infrastructures are not a new thing yet they never fail to mesmerize the public of the time. One example of such proposed and approved structure is what we are going look at. In order to connect the north and south side of London, the famous designer Thomas Heatherwick unveiled his amazing concept of a pedestrian bridge. The Garden Bridge as it is being called was selected by Transport for London as the new walkway traversing between Temple and South Bank, London. As the name suggests, it does remind one of the hanging gardens of Babylon; the only difference is that this can be called the hanging bridge of gardens!

Heatherwick is known for his iconic double Decker bus design and his splendid 200 piece cauldron at the London Olympic Games. Now he has come up with another magnificent idea for Thames Walkway Bridge; he says: “The idea is simple; to connect north and south London with a garden.” It is said to form into a tunnel of flora with grass, trees, wildflowers, native plants, etc, with the center portion for the visitors and pedestrians to walk on. They will have all to get amused, standing on the bridge and viewing the bustling city life, all thanks to the elevated outposts on the edge of the bridge.

The idea presents itself as a revolutionary one, opposed to many, as a bridge is supposedly a quick stream to cover ones displacement- they are to be as efficient as possible, however, the Garden Bridge adheres to encouraging you to meander around the rosy smells.

Joanna Lumley, a well-known British actress, has been a protagonist of the above idea. “This garden will be sensational in every way,” she said, “a place with no noise or traffic where the only sounds will be birdsong and bees buzzing and the wind in the trees, and below the steady rush of water…there will be blossom in the spring and even a Christmas tree in mid-winter. I believe it will bring to Londoners and visitors alike peace and beauty and magic.” Of course for Lumley, the above con is part of the appeal. As she proudly notes: “It will be the slowest way to cross the river.” Watch out and wait for this splendid stopover on your way to crossing river Thames. Irresistible as it seems, it is going to be a great stop to relax and cross over-ironic!