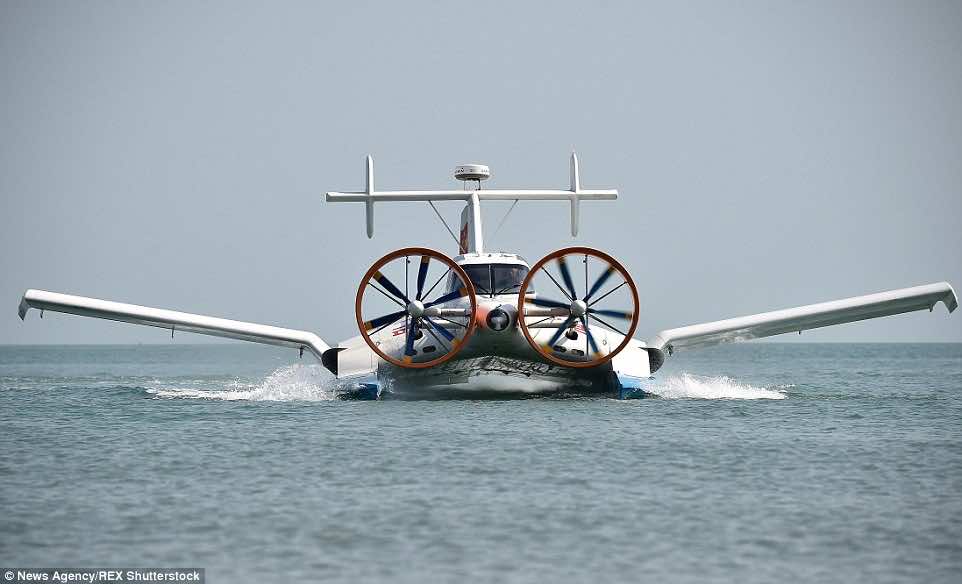 We have seen many aircrafts capable of landing and navigating across the sea. But mostly, they are driven by the thrust generated by the aircraft’s engines or turbo propeller. Chinese CYG-11, on the other hand, uses an air cushion technology similar to hovercrafts to wade through water. Due to this approach, the aircraft never lands completely on the sea and continues to face minimal air resistance instead of higher water viscosity. Two of these multirole aircrafts were tested in the Haiku area of the Hainan province. Not much is known about the project, but it is widely believed to be a collaboration between China and Russia to develop efficient sea-launched planes. It operates on a phenomenon called  the wing-in-ground effect. When the wings are close to the ground surface, the lift is increased, and drag becomes much less. You may have experienced it while swimming close to the bottom surface. By placing the wings low on the fuselage of the aircraft, we can get this scientific principle to work for us. Essentially, we have an aircraft that is floating on a film of air of three to five meters high above the ocean surface. Pretty cool, eh? Chinese engineers involved in the project claim that these aircrafts have a range of 1500 Km and a top speed of 250 Km/h. The aircraft can carry 18 passengers along with two crew members. It has two propellers mounted near the nose of the aircraft for propulsion. The company wants to go commercial and claims to have developed a bigger version lately that can carry 40 people. They want to continue developing before they reach a target of 180-200 people. When they will reach this target, they will start commercial manufacturing. The main industries they would like to target are coastal patrolling, defense, observation and even commercial ventures could be done later on. The planes can also be used as a catamaran sea landing aircraft for high-speed take-off, landing purposes. In production, it is expected to cost around 20 million dollars per piece. According to the pilots who flew it, the aircraft appears to be like a speedboat on the water surface but without any bumps due to the air cushion separating the plane from the surface. In the air, its just like any aircraft. In all fairness, holiday airline companies would be like “shut up and take my money”.