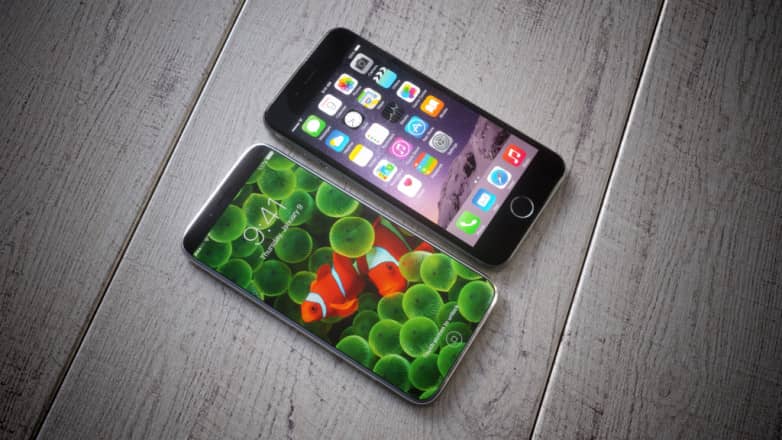 The recent rumors of the iPhone 8 bearing curved screen edges, the delicate balance between glass and metal and an iPad Pro-like Smart Connector for an AR or VR headset are in jeopardy with a newly leaked schematic that make the incoming model look ugly as hell!

The disclosure of iPhone 8 is there at China’s Weibo (via 9to5Mac), with the 3D designs originating from a Foxconn factory in China. While the picture does show the previous speculation of having a larger edge-to-edge screen, no home button and slimmer top and bottom bezels, many other features are a matter to frown.

All of us were expecting iPhone to remove the iPhone’s iconic home button and move the Touch ID fingerprint sensor underneath the OLED screen, but the leaked design shows a rather disappointing and ungraceful home button/Touch ID sensor on the backside of the phone that lies just below the Apple logo. It means that you couldn’t access the sensor without lifting the phone up, while the battery cases would also have an ungainly hole.

The plans of embedding a rotating dual camera and a LED flash is also dissimilar to the Apple traditional style. Maybe the larger screen forced Apple to relocate some parts, but by the looks of the schematic, it looks like the parallel dual camera system could interfere with the front-facing FaceTime camera.

While we expect iPhone 8 to be the most feature-packed phone on the original iPhone, this rather disappointing leak if found to be true, means many would certainly skip this year and wait for further improvements in the iPhone 9.

For now, let’s just hope that this abomination was a failed prototype or discarded design.