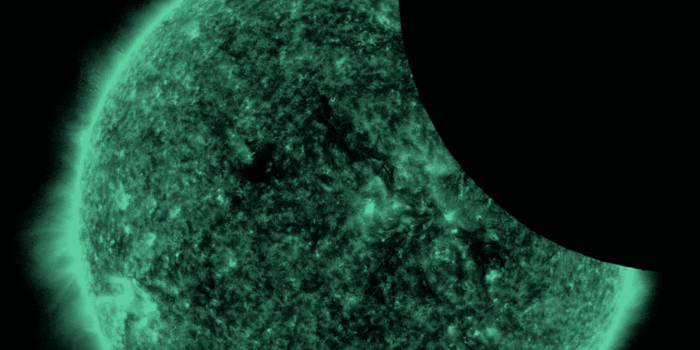 The moon blocked the sun last week in front of the satellite.

This caused a solar eclipse and it went on for many hours.

‘Still, we might see isolated periods of geomagnetic storming at the G1 (minor) level due to the influence of high-speed solar wind from a coronal hole,’ EarthSky reports.

A picture of the moon standing in the way of the sun was uploaded on Twitter, where one user said, ‘the moon looks like it is taking a bite out of the sun.’

The early warning given when SUVI observes a solar eruption comes at least 15 hours before the associated CME arrives on Earth. CMEs are huge expulsions of plasma and magnetic fields from the sun’s corona.

The eclipse was not observed on Earth. However, people in the US saw an enthralling cosmic show of a reddish moon levitating in the dark sky on November 8. It is called the blood moon.

The large, red moon was seen over New York City, Washington DC, Virginia, and other parts of the US until it returned to its silvery color about two hours later.

Skywatchers in Asia and Australia saw it with their evening moonrise.

The eclipse kept revealing over nearly six hours as the moon gradually edged into the Earth’s paler outer shadow, its ‘penumbra,’ then entered the Earth’s darker inner shadow, or ‘umbra,’ before reaching totality and eventually emerging from the other side.

NASA said the moon was 242,740 miles from Earth during this lunar event that lasted about 90 minutes.