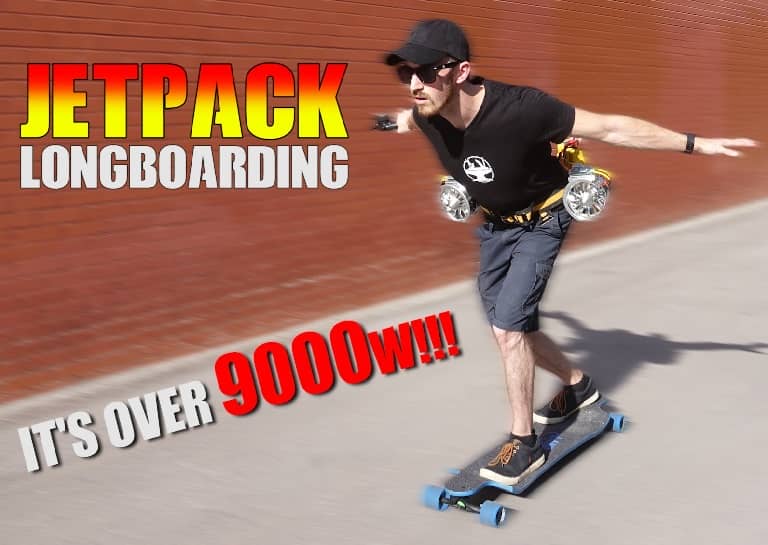 Hacksmith is one of the well-known DIY YouTubers who has recently created an electric turbine-powered jetpack that is as crazy and dangerous as it sounds. It is not just used as a longboard attachment but the electric turbine is being tested as a flying mechanism in the Ironman suit currently in development.

Those who know the Hacksmith know of his obsession with creating a real-life Iron Man suit with the same functions. There has been some success but there are still many challenges to solve. For example, he has successfully created pneumatically powered exoskeleton arms that can lift massive weights upto hundreds of kgs but the arms cannot hover for more than a few seconds. Electric turbines were used but it did not generate enough thrust for flight.

For his experiment here, the Hacksmith strapped the electric turbines to his arms – which is both brave and ridiculous at the same time. Anyway, he was able to ‘super jump’ and although it will take more work, it does show some promise. The jetpack uses longboard with 2 electric ducted fans (EDF) strapped on it with a belt. The turbines are both made using 3D printing.

The turbine-powered jetpack has maximum uplift of 5.8 kg each and maximum power of 5800 W generated by 4035 Brushless Outrunner 700kv. The Hacksmith reached a maximum speed of up to 55 km/h on the longboard. The experiment in the video above is an excellent proof of concept but we still have to wait patiently for a fully functional, real-life, Iron Man suit.