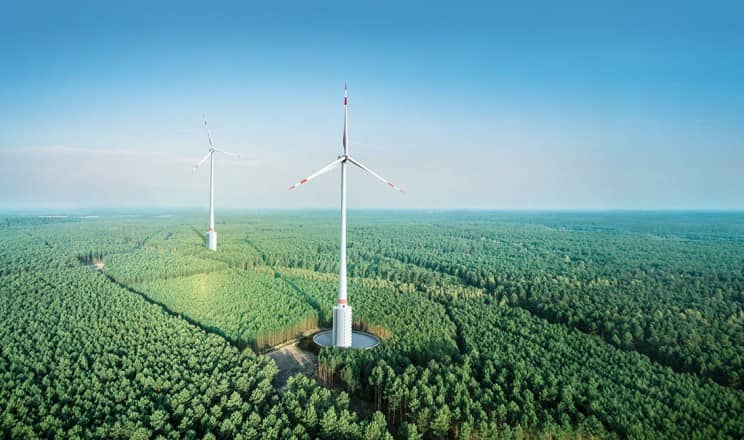 Since the energy crisis and environmental pollution have become a global phenomena, many countries have stepped forward with different solutions for this issue. One of them is shifting toward sustainable energy sources such as wind and tidal energy. Hence, wind turbines have become a common phenomenon all around the world especially in Europe.

Max Bögl Wind AG, a Germany based company, which also has a history of building tallest turbines, has constructed world’s largest turbine, beating all of its own previous records. It is also worth mentioning that Germany is the third in the world for growth in renewable energy every year.

Overall, the turbine is 246.5m (809ft) tall including the size of the hub which is 178m (584ft) and the tips of the blades. The annual energy output is increased by 0.5-1 percent for each meter added in the height. There are fewer interruptions in the generation as the turbine is faced with more consistent and stronger winds and there is considerably lower turbulence due to increased height.

“The foundations of the four most powerful wind turbine generators will be used as an upper reservoir for this purpose. They are connected via an underground penstock to a pumped-storage hydropower station in the valley that can provide up to 16 megawatts in power. The electric storage capacity of the power plant is designed for a total of 70-megawatt hours,” as described on the company’s website.

Based in Galidorf, Germany, these turbines are a part of ‘water battery’ project. During the first year of its service, the project has an expected revenue of €6.5M ($7.6). The tallest turbine is a member of a group of four turbines having heights ranging from 155-178m (508-584ft). Each turbine has a GE 3.4-137 3.4MW generator at the top of it which has an average capacity of about 10,500MWh/year.

What gives turbine a little extra height is its water battery aspect. These turbines include 40m tall water towers in their construction. These towers act as high altitude reservoirs being a part of a pumped storage hydroelectric power station which is located 200m below the turbines. By taking the help of wind power, tge water is forced against gravity to be stored in these reservoirs. This water, in turn, is used to generate electricity. With this duo of energy generation and energy storage, these turbines will be able to power a 1000 homes at a time.

With the success of this project, Germany might get one step ahead of America in the generation of electricity using wind power. Great going Germany!