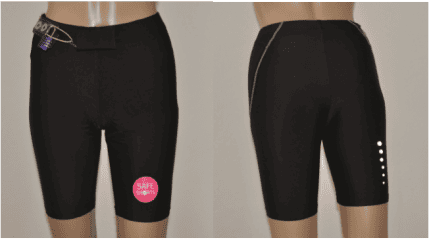 A German company has made all the headlines as they launched their unique line of women’s underwear that, “protects the wearer against sexual assault.” The company calls it ‘Safe Shorts,’ and it uses a slash and tear-resistant fabric which doesn’t rip apart very easily. The underwear also features a combination lock and a loud alarm system, all to deter an assaulter.

The creator of the Short Pants, Sandra Seilz, narrated her story of feeling unsafe during her daily jogs, which led her to create such a product. She recalled that she too was once attacked by a group of three men who jostled to take down her pants while she was jogging, and that attack left a very deep scar on her mind.

The product has got a lot of appraisal as Cologne, Germany, reels from a horrendous wave of sexual assault against women during the last New Year’s Eve celebration, which makes the Short Pants even more relevant to the prevalent immigrant scenario.

Short Pants have multiple layers of protective measures. The first is the pants’ drawstrings that are made of tough to tear or cut material. The second is the combination lock that resists against pulling down the pants if it is not open and the drawstrings are not untied. The third is the soft protector in the crotch area that resists any tearing of the Soft Pants between the wearer’s legs. And finally, an alarm is also attached to the pants, that produces a loud acoustic signal (130 decibels) in the case of any tampering. The alarm can also be triggered voluntarily by sharply pulling the drawstrings, which could help in scaring off the attackers and drawing the attention of people.

The uniquely designed undergarments are available in two forms, Safe Shorts for jogging and Safe Pants for everyday use, both of which can be worn under a skirt or with jeans.

The product has caught some criticism and controversy, as the people claim that while the idea is praiseworthy, the product should not deflect the attention from the larger issue of the massive influx of Muslim immigrants that are threatening the very existence of western lifestyle. Still, the Oberhausen-based company claims that they have been overwhelmed by orders not only from Germany but countries like Japan, Finland, Sweden, Italy, Taiwan and the United States.