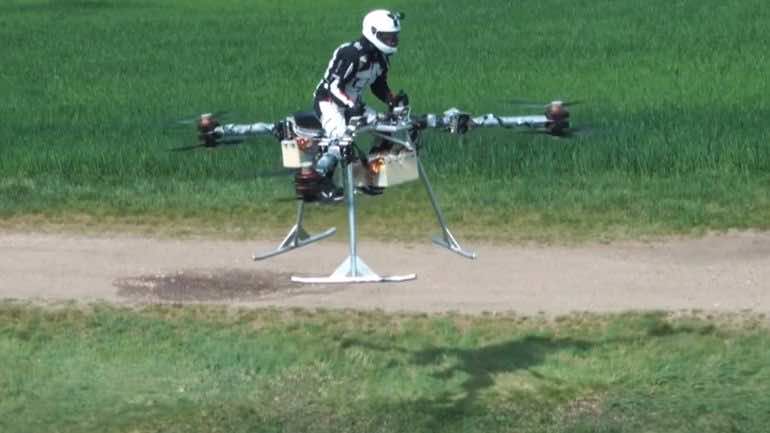 A personal flying vehicle sounds quite interesting, however, getting it off the ground can pose quite a challenge. That doesn’t seem to have been able to stop a Hungarian team who have managed to execute the first manned flight of the Flike tricopter concept demonstrator. Bay Zoltan Nonprofit Ltd. is a state-owned applied research institute located in Hungary. A team of flight enthusiasts from this institute has, within a year, brought the concept of a personal flight tricopter from the design stage to its manned flight phase at Miskolc Airfield in northeast Hungary on 7th March. Flike (name derived from fly-bike) during its manned flight had a weight of 210kg and was able to take off from ground for only a couple of seconds. Despite that, it was able to take off and then land safely. In another manned test flight that followed, it was able to fly meters off the ground and then demonstrated maneuvering and hovering capabilities while tackling wind in a flight that lasted for a full 1.5-minute in a controlled environment. It sports a Y6-layout along with six rotors that have been paired into a coaxial arrangement and driven directly by individual electric disc motors. These electric motors are given juice by lithium polymer batteries and as per claims of team, they are capable of providing power for about 15-20 minutes of hover flight and about 30-40 minutes of cruise flight.

Control is imparted by changing the rotation speed of the individual rotors thus allowing Flike to exhibit performance in air similar to a conventional helicopter; hover, roll, drift, bank, climb, yaw, turn and dive. The team also mentioned other flight capabilities that are ‘yet to be named’. The flight management computer (FMC) is responsible for taking care of the craft’s stability, lateral position and altitude and owing to this very same FMC, team claims that flying Flike is going to be as easy as riding a bike. Team further added that Flike is capable of providing an emergency lift in order to prevent crash if and when any electric motor fails.

Now that the first flight has been a success, the team is busy in building another prototype that will sport features that have been envisioned for the planned commercial design. The ultimate goal is the commercialization with team turning this into a startup company and is looking for investors right now.