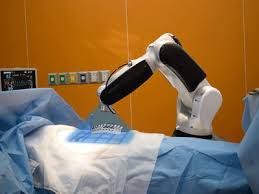 As the virus is spreading like fire, the resources to fight the disease are becoming limited. In such a scenario, Wuhan authorities are using all possible solutions to treat and control the epidemic.

Stepping of robots into the medical field is not new now. Apart from using efficient algorithms in medicine, we have seen robotic surgeries happening around the world. This time, the U.S is using a robot to treat a patient with Coronavirus.

The patient going through the experience of having a robot as his doctor reported to the medical authorities that he was feeling symptoms of the virus. Further diagnosis confirmed the disease on Monday. He had traveled to Wuhan recently, and the epidemic caught hold of him. He was isolated to control the spread of the virus. According to reports, he is in stable condition now.

There is another dimension that states the benefit of using robots for contagious diseases. As the word reflects, the fewer humans are exposed to any such scenario, the more lives one can save. But what about the doctors, who matter what, have to treat all kinds of patients, having their lives at risk at all times. So, here steps the robot in, who acts as the first point of contact with the patient and communicates with the patient. Using a screen, the information is sent to the human doctors. Fancy though, the robot is made to wear a stethoscope as well.

Reporting to CNN, Dr. George Diaz, chief of the infectious disease division at Providence Regional Medical Center in Everett, Washington, says, “The nursing staff in the room move the robot around so we can see the patient in the screen, talk to him,”

The patient has not been discharged yet. Along with him, 43 others who are directly or indirectly in contact with the patient are being monitored by the health authorities. Close contacts are of a greater risk of catching the virus, so anyone coming 3 to 6 feet within the range of the patient has to be actively checked.

Undoubtedly, the idea of employing robots for such risky tasks lessens the probability of the spread of deadly diseases. But is it fair with the patient? If all the requirements are being met and the patient’s health and treatment are not being compromised then there is no bad in using a robot for this purpose.