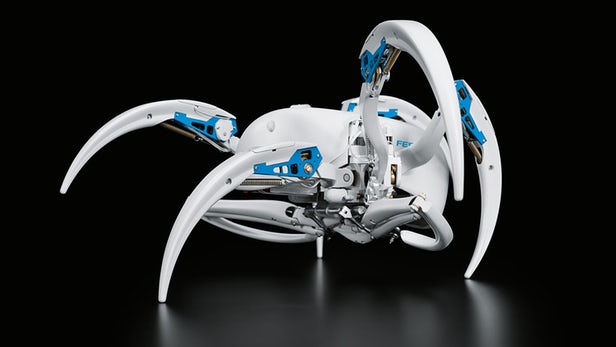 Festo is a German electrical automation company known for making robotic animals. It previously created a robotic dragonfly, kangaroo, and a penguin. It is back again with a spider that can roll like a wheel and a bat that flies on autopilot.

The BionicWheelBot robotic spider is inspired by the flic-flac spider (cebrennus rechenbergi). The spider walks normally on uneven terrain but rolls across the smooth ground and does so twice as fast as walking. The robotic spider is equipped with 15 motors and is remotely controlled via a tablet.

The robot reminds us a little of the battle droids from Star Wars and moves along on six spring-loaded legs when in the walking mode with the remaining two folded beneath its body. When the robot needs to roll, these six legs transform into two wheels and the previously folded legs extend out to either side to push the rolled-up robot along.

There is an inertial sensor onboard which allows it to know the position it is in and the time when it needs to push off again. The robotic spider can move much faster in this rolling form as compared to the walking one just like the biological counterpart it is modeled after. You can check it out in the video below:

The second robotic animal unveiled by Festo is the BionicFlyingFox. As evident from its name, it was inspired by the flying fox also known as the fruit bat. The robot only weighs 580 g and has a 3D-milled foam body and a carbon fiber skeleton.

The wings fold independently and are covered in one continuous membrane. This membrane is made up of two airtight films and a knitted elastane fabric. The two are spot-welded together at 45,000 points. There is a honeycomb pattern in the fabric that prevents small cracks from propagating. This means that the robotic bat will still be able to fly if there is minor damage to the membrane.

A human operator needs to manually control the taking off and landing parts of the flight. But, when it is in the air, an autopilot system takes over which works with two ground-based infrared cameras, which automatically pan and tilt to follow 4 infrared LEDs located on the robot’s legs and wing tips.

The images from the cameras are sent to the central master computer which serves the purpose of an air traffic controller. You can check out the robotic bat in the video below: