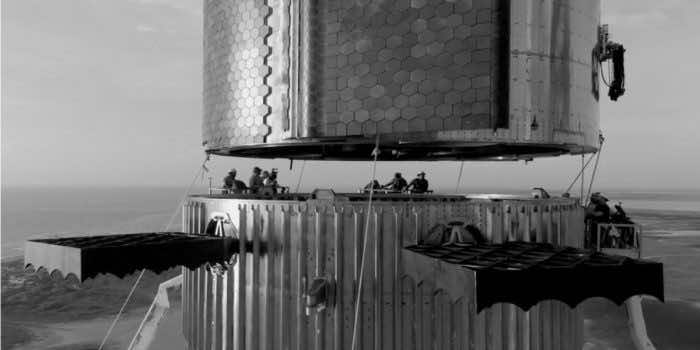 The Starship, SpaceX’s spaceship for transporting humans to Mars, has been captured in a new image that exposes its enormous size.

Elon Musk has revealed the most recent image of the company’s massive spacecraft. The image, obtained from the company’s High Bay tower, depicts the gigantic spacecraft prototype, designated SN24, being worked on by a dedicated team of engineers.

SpaceX has been open about the ship’s measurements: a diameter of roughly 30 feet, a Starship 165 feet tall, a Super Heavy rocket 400 feet tall, and a total system height of around 393 feet — estimates that Musk has modified as the design has advanced.

The gigantic model is also coated in hexagonal thermal shield tiles, allowing it to reenter the Earth’s atmosphere on its inaugural voyage in a matter of months.

Previously, prototype models of the ship, created in the Boca Chica plant in Texas, were challenging to envisage from a distance. However, photos like this show off the spectacular design and imply that it’s relatively huge.

However, the current photograph shared by Musk provides a clearer impression of the rocket’s grandeur. This ship can transport 100 people into space, and one of its most noteworthy achievements is its size.

Considering this, the Federal Aviation Administration has demanded that SpaceX create a complete list of sustainable adjustments to its launch site that are beneficial for the environment. As a result, the launch may take some time.