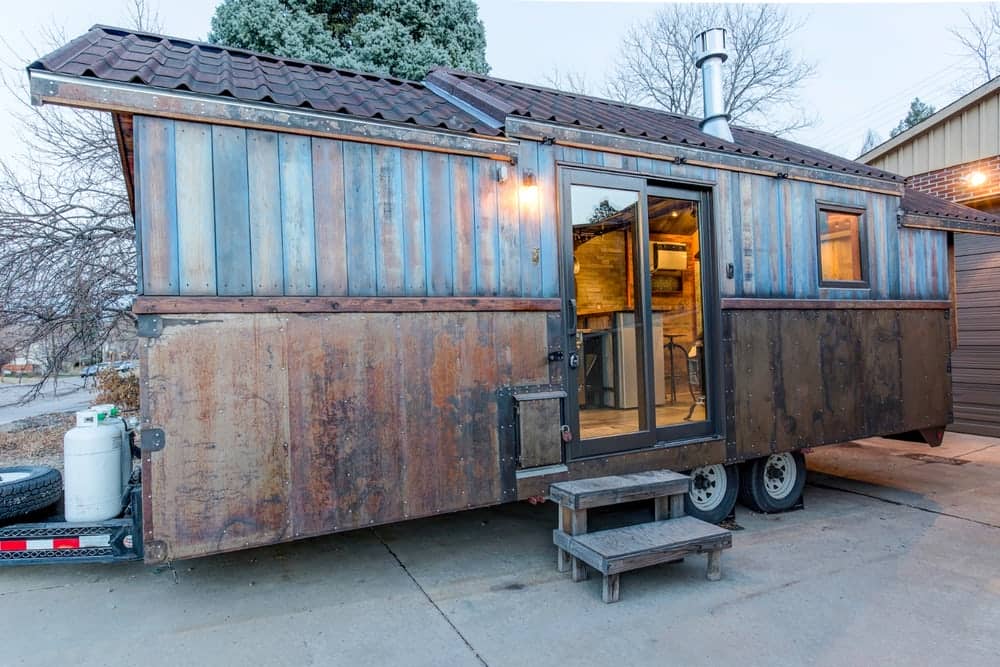 You don’t have to be super rich to own a palace. The Earth and Sky Palace is a house made out of a trailer that will give you the luxury of a palace in a tiny home. The towable house has a rugged outside appearance to give it an antique-ish look and the insides are loaded with luxurious features to make you feel like a royalty.

A theatrical prop and stage designer Dan Huling is the builder behind the house whose inspiration to build such a house was his childhood memories of the old mining towns in the Colorado Rockies where he was brought up.

The base of the house is a 24-foot trailer and the entire house spans over 200 square foot of floor space with a steel frame. Heart pine, blue stained cedar, and a steel trim clad the entire dwelling that also incorporates a tiny pet door. Onduvilla tiles line the roof of the house that comes with an app controlled air conditioner unit.

The entrance of the house is a large glass door that slides away to open. A posh Verona oven with a propane stove shines in the small kitchen along with an energy efficient fridge that even works with both grid and solar power. A porcelain sink, custom cabinet, and a butcher’s block countertop add more class to the tiny space. Along with the kitchen stands a small dining area with two adjustable stools.

The bedroom stays on the ground floor which leaves no space for a separate living room but the bedroom can be converted to a sitting area. A small storage loft above the bedroom can be accessed with the help of a ladder. A sliding partition separates the luxury bathroom from the rest that has a brass sink, toilet, and a walk-in shower. The shower head alone costs a US$ 1,000. The insides of the walls are covered with alligator skin wallpaper and a section is covered entirely in 1800s antique pressed tin from a Nebraska prison.

The Earth and Sky Palace is wired for 5.1 surround home theater system that you can choose to install. A Thelin Hearth pot belly direct vent heater is installed and you can control the Friedrich air conditioner unit with your iOS device. A water heater is also installed that is propane powered and controlled by a touch screen.

The palace gets its electricity and water from the standard sources but it is solar ready and you can choose to install a solar system as and when required if you choose to remove it from the grid. The house has a spray foam insulation and is lighted with LEDs throughout. the house was originally envisioned as a guest house to the toilet is plumbed for a septic tank.

The Earth and Sky Palace is up for sale costing $74,000, sounds apt for a tiny palace.