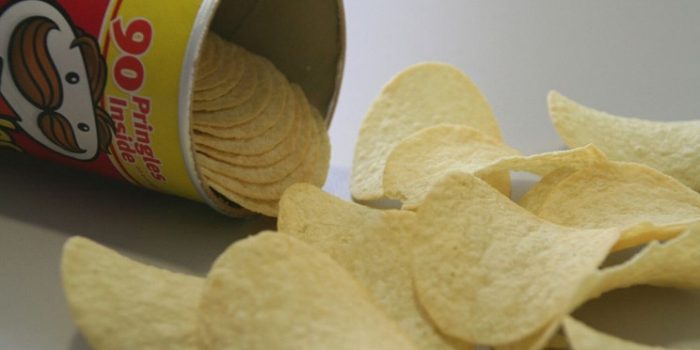 There is more than meets the eye to the classic Pringles’ hyperbolic paraboloid shape. Hyperbolic Paraboloid Shape That Adds To The Pringles\ Extra Crunch, Explained

“Once you pop, the fun doesn’t stop,” says the slogan of the famous American chip brand Pringles. But if you happen to be an engineer, you may wonder that Pringles is more than just their addictive crunch and taste.

Actually, Pringles have been shaped like a hyperbolic paraboloid.
So, what is unique about the shape of a Pringle? Well, the shape stops the Pringles on the bottom of the can from breaking under the pressure of all the Pringles above them. But the shape also adds to their quality crunch.

Before diving into the minute details of Pringles chips, it might help explore what a hyperbolic paraboloid is. In the amazing world of geometry, this shape is any quadratic surface and a doubly-ruled surface with precisely one axis of symmetry and no center of symmetry.
Often called “saddles” (for clear reasons), their name derives from the fact that their vertical cross-sections are parabolas. This shape’s horizontal cross-section, on the contrary, are hyperbolas – as states the name.

This shape has many productive uses in the real world, other than yummy potato-based snacks. As hyperbolic paraboloids are doubly-ruled, they are comparatively easy to construct using a sequence of straight structural elements, making them functional as wonderful structural elements in architecture.
For this cause, you will usually find them utilized to build thin “shell” type roofs. These can be made using either timber or steel sections that are then clad or built with concrete.

“The use of hyperbolic paraboloids as a kind of thin shell construction was initiated in the post-war era, as a pioneer of modern architecture and structural engineering. As it is both lightweight and efficient, the shape was used as a way of minimizing materials and increasing structural performance while also forming impressive and apparently complex designs,” wrote Design Buildings.

In architecture, hyperbolic paraboloids find their structural integrity from their shape instead of their mass (multiple standard roofing ways). The shape’s curvature also reduces its tendency to crack under compression, giving it impressive stiffness.
The shape also helps materials and structures tolerate unequal loading from both dead loads and live loads (for example, wind).

Pringles In The Making

Let us jump on to something a bit more palatable, as a matter of fact, yummy. How, truly, are Pringles made? Unlike more typical potato chips (or crisps if you are from Blighty), Pringles is not created out of potatoes only. In fact, a Pringle manufacturing begins as a slurry of rice, wheat, corn, and potato flakes – along with a few additives.

This Pringle “dough” is then pressed and rolled into a super-thin sheet before being cut into chip-sized pieces. These cuts are then removed from the remains of the sheet by a uniquely-designed machine.

These chips then move forward on a conveyor belt and are pressed onto molds to give them their iconic shape. These molded chips then move through boiling oil and are fried for a few seconds.

The chips are later blown dry, sprinkled with powdered flavoring, and later flipped onto a slower-moving conveyor belt that helps them stack. Once complete, the chip stacks are then moved to their cans, foil sealed and delivered out to their anxiously awaiting customers.

Precisely created geometric shapes are always good to look at, as their proportions are quite eye-captivating. Exactly like an almost perfectly symmetrical human face that is naturally proportioned to abide by the golden ratio happens to be called beautiful. In the example of a Pringles chip, the crossing curves form a sturdy structure and an attractive geometry.

The hyperbolic paraboloid’s intersecting double curvature avoids a line of stress from creating, which doesn’t let a crack naturally occur. That’s the reason behind Pringles having that extra crunch in them when you either take a bite or when you gobble a whole Pringle in your mouth.

If you routinely eat Pringles, you would be aware that they never break off symmetrically, but instead, they break in varied directions and result in flakes with varying shapes. It’s all because of the hyperbolic paraboloid geometry of every chip.

The concave U-shaped part is spread in tension, while the convex arch-shaped part is tightened in compression. Due to this double curvature, the shape faces a delicate balance between push and pull forces, letting it remain thin yet interestingly strong.

It’s clear that the shape of Pringles also makes stacking the chips easy. Again, this is because of their saddle shape, which lets the chips be easily placed on top of each other. And as for the Pringle that rests at the very bottom of the tube, it’s able to keep its shape without cracking because the net weight of the chips doesn’t actually exceed 150 grams.

Additionally, the tube’s hard body made real because of the hyperbolic paraboloid geometry of the chips, decreases the chance of breaking the chips when they are being shipped.

From potato chips to structural roofs, this special geometrical wonder is truly mind-blowing.