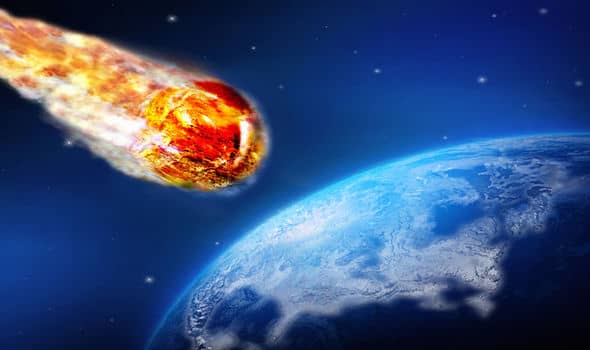 Has your teacher ever told you that dinosaurs are no longer with us because they had small brains? Well, Bill Nye’s 2nd-grade teacher told him so. We know that could not have been the reason for the extinction of any species, I mean some humans are still here, despite their … Anyway, the Chicxulub impactor struck Yucatán Peninsula in Mexico,  less than 66 million years ago, which was a 10-kilometer-in-diameter asteroid. The climate disruption caused by the impact was such that 75% of animal species along with plants became extinct including all non-avian dinosaurs in the Cretaceous–Paleogene extinction event. It is not a million-year-old event only, Chelyabinsk meteor hit the atmosphere of the earth, in 14th Feb 2013, over Russia. We would never want that to happen again, right? However, is it possible for us to stop a asteroid? Let us find out.

First, let us understand what we are dealing with here, oh an asteroid, right! So when an asteroid hits the earth’s atmosphere, which you may think is like passing through fluffy clouds, actually, it acts as a concrete wall. The impact will make the fast-approaching asteroid to explode in an airburst. Most of these asteroids are very small. Let us see their size to the effect ratio. Say the diameter of <10 meters hits the earth atmosphere, It will burn in the air with a blue, green or possibly white streak, upon which humans will make wishes, because, you know, Logic! Now if the size of the asteroid lies between 25-45 meters, we have got ourselves an impact range of Arizona Meteor Crater, or as Bill Nye calls it, a city killer. Increase the asteroid size to 100-140 meters, and we are talking about a country killer, and anything bigger than that we have a continent killer and you get the idea.

The next question is how do we find this killer; the answer may not be as simple as using telescopes. The telescopes can find out the fast moving objects, and objects that are crossing the Earth’s orbit. However, a telescope will miss 100,000 of these killers. The solution is to build a Sentinel Spacecraft, which can find even tiny charcoal particles in earth atmosphere, only detectable by infrared light. Once you have located a asteroids of any size through surveillance, we need to destroy it.  Hold your horses, because bombing a fast-approaching asteroid can make it explode into small pieces that will still bombard the earth, only at multiple places now. So what’s the next brilliant idea in your mind?

Let us talk about deflecting it, redirecting the asteroid away from the Earth. If the asteroid is even moving towards us at 10 Kilometers/second speed and we want to change it’s speed about 2 milimters a second, The change only accounts to about a 10,000,000 i.e. tenth million of the total. Now that may not sound like much, however, the asteroid weighs around 10,000 tons at least. A lot of force is required to redirect such an object with blunt force. The problem with this head-on collision is the same as bombing the asteroid, i.e a meteor shower.  Have you heard about the Deep Impact Mission, because at this point, you might want to. The idea is known as Kinetic Impactor and has been agreed upon by all the experts to be effective.

There might be one other theory that employs a swarm of Laser bees much like the laser spiders in the Matrix. We swarm the asteroid and beam the asteroid all-around it systematically, avoiding uneven surfaces. Would this be able to alter the trajectory of the asteroid? We don’t know. On the Laser Bee idea, we have decided to use a wait and see policy. Rusty Schweickart, a retired astronaut, studying the potential threats from the near-Earth objects doesn’t take the idea seriously. So if a meteor really comes towards us, we are pretty much doomed.

“I’ve never been able to convince myself that they’ve ever done any cost-effectiveness investigation … assuming that they can actually solve the multitude of other technical issues inherent in the concept. It may well be that crashing one of the swarming satellites into an asteroid would have more of an effect on its trajectory than having the whole flotilla aim lasers at it”  Schweickart said.