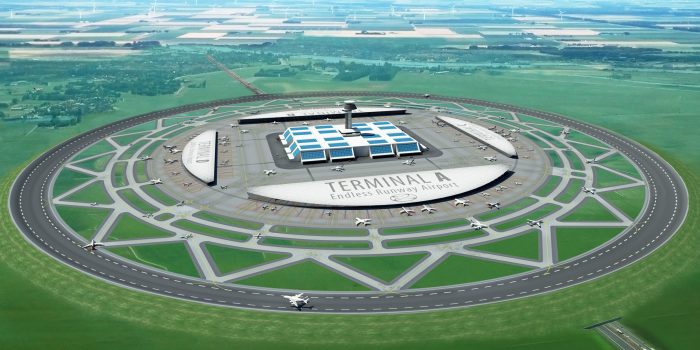 Engineers think out of the box, and that’s where the crazy ideas originate from. A similar idea was that of a circular runway. For quite a long time, research is being conducted in the Netherlands Aerospace Centre on circular runways. Let’s see the pros and cons of the proposition. Will it actually work the way they are planning it to turn out? Or will it lead to a disaster!

Circular runways were intended to minimize the delays and long waiting queues. Furthermore, to make the area spacious and allow airplanes to land in any direction, but can the idea withstand diverse weather conditions?

If you have a knack of aerodynamics or have read the basic laws of physics, you would understand how banks can prove to be dangerous for the flight. The lift required for the takeoff and balance is best generated when the wings are leveled to the ground, toning with the gravity. And when any rolling takes place, the stall speed rises.

Let’s talk about the slip, the airplane encounters. It is quite a common observation that wet or snowy surfaces increase the stopping distance, and worsening the situation is when the water or snow falls on the slope. Think again, if the design can bear winters!

Another major issue is the bubbling that occurs during landing, thus shifting the centerline of the runway. The side wings might bang with the higher paved slope. And what about the struggle of those sitting in the control tower? How will they keep a track of every next flight, navigating hour to hour and sensing the winds that will be hitting the plane? And the idea of having multiple landings simultaneously fails when we consider the factor of crosswinds.

For a count of 3, only one would be the lucky one getting space into the wind, while the other two would be facing crosswinds and tailwinds as well. And who will monitor the distances between aircraft? Again, a second design implementing automation shall be required to enter the ground. Aviation enthusiast raises a concern here, “What if three airliners are landing, something goes wrong and they abort landings. Their prescribed go-around procedure would likely take them dangerously close to the other aircraft.”

Another important question popped, what would be the scenario during emergency landings? Trying to convince, Henk Hesselink, the engineer behind the design, assures that an additional 20 meters have been added in the width. But still, the large walled edges can put the lives of many on risk. All this is just one side of the story, you must have an opinion of your own, and to make one, you should watch the video below.