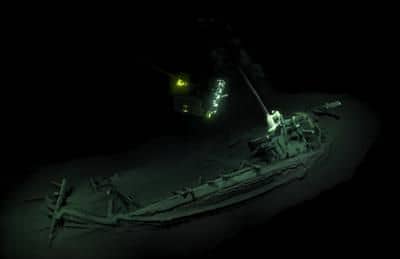 Archeologists are stunned by the discovery of a 2400-year-old intact shipwreck of a Greek trading ship at the bottom of the Black Sea.

The 75-foot long ship has remained intact for over 24 centuries with almost all of its components including rudders and mast remaining undamaged. The ship has survived through such a long time without eroding away due to its burial deep down in the oxygen-less water which prevented the wooden hull from crumbling away due to oxidation.

This archeological discovery was made as part of the Black Sea Maritime Archaeology Project (MAP). The principal investigator of the Project, Professor Jon Adams from the University of Southampton  said regarding the discovery:

“A ship, surviving intact, from the Classical world, lying in over 2km of water, is something I would never have believed possible.”

This discovery would make a great contribution to the understanding of shipbuilding in ancient times. A two-hour documentary highlighting this discovery is also planned in the future.