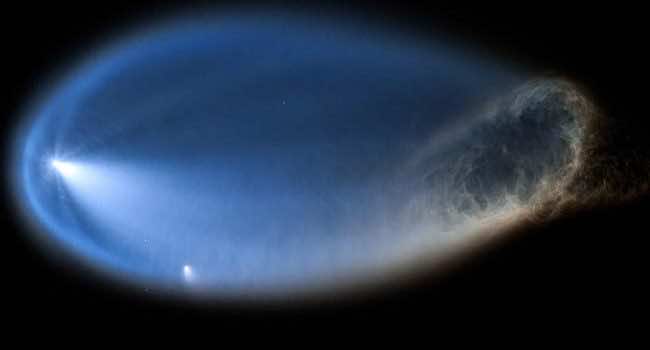 A dazzling streak brightened up the early morning sky, stunning and puzzling stargazers. The phenomenon dubbed a “space jellyfish” was observed while SpaceX launched satellites on Thursday, May 5.

Even though the flight originated at Florida’s Kennedy Space Center, social media users caught its effects across the Sunshine State and beyond. While jellyfish are common along the Florida coast, visitors who witnessed the most recent rocket launch from the Kennedy Space Center were treated to something spectacular.

When a rocket takes off around dawn or dusk, a visual phenomenon known as a “space jellyfish” occurs. A viewer may be in complete darkness, but as the craft reaches higher altitudes, the sun’s rays reveal the plume of gases trailing behind it. The effect is similar to the bell and tentacles of a jellyfish medusa.

The SpaceX flight formed a “space jellyfish,” many people who rose early to see the launch observed. In addition, several social media users posted the sighting of a cloud of lighted gases in the black pre-dawn Florida sky.

“Basically, what’s happening is, it’s still dark outside, but you have the sun illuminating the plume as it’s in space,” Jessica Jenson, SpaceX’s director of Dragon mission management, explained to the media.

The reaction varied depending on where people were when they saw the rocket on Thursday. Some observers reported a horizontal streak of silver, while others saw what appeared to be a billowing luminous cloud, as photographs shared online show.

While the space jellyfish effect evokes pictures of the animal, real jellyfish have travelled to space. In 1991, NASA sent hundreds of microscopic jellyfish into space on the Space Shuttle Columbia to study them.