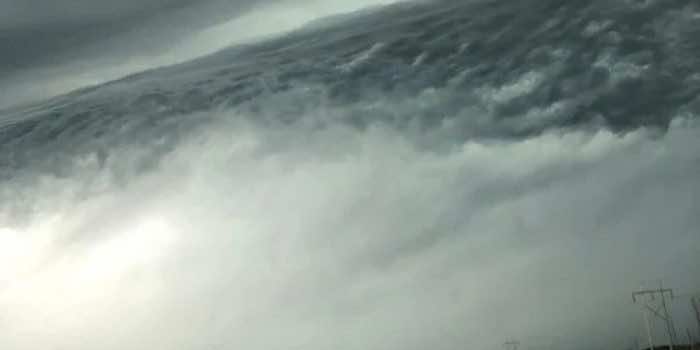 An exceptional and worth watching photo was circulating over the internet for several days, and it has been found that it was captured in Minnesota when a woman named “Theresa Birgin Lucas” was heading back to her home after visiting family at a nearby hospital. The picture being captured is not a typical view of the scenic beauty of clouds. Instead, the majesty clouds in the picture look like a storm in the ocean and that too in the sky. She stated that she took the picture on June 18th as her daughter was worried about her safety on the way. She said that a storm was heading north and I was also going towards this side, so to ensure the daughter of my safety, I just took a picture of the current weather condition and sent it to her.

Lucas said, “I took this photo while I was driving (oops) and just sent it to her, telling her I was not that far from home and just to stay in the basement. She further stated that the photo had been taken from an iPhone 8 and regarded it as “straight out of the camera”. Moreover, Lucas observed that the beauty is majestic even without applying any filters and is exactly similar to what she had seen with her own eyes there. As she said, “I really like the beauty in the photo, knowing that nothing has been touched.”

By accepting the fact that it is not a usual picture, Lucas gave voice to her opinion and posted it on her Facebook account. She wasn’t aware that it would be circulating on the internet in just a few hours. Seeing the immense response, she decided that she is going to feature this photo in this year’s photo contest, which will happen at Minnesota state affairs. She has also given the title of “Ocean in the Sky” to this incredible photo.

KVRR meteorologist Mariah Bush cherished this never-before-seen picture and said, “This is a very rare photo. My initial thought was maybe some basic clouds, cumulus nimbus clouds, or even a shelf cloud, but then after further looking, there are some clouds I have never even seen before myself. So, pretty unique, actually. “

In response to this, Lucas stated her joy in the following words, “I am happy so many people are enjoying it. It truly was just a quick picture taken on my iPhone 8, which cracks me up. It is a live photo — it’s fun to watch it, music playing, and bugs splats on my windshield! “