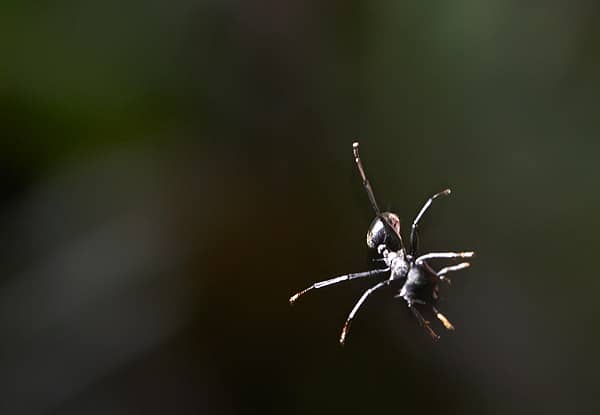 Insects are generally not afraid of heights, and they have science to thank for it. Let us put your mind to rest by a simple explanation of how and why.

You must have heard about the square-cube Law. Say a human has been increased to double of his original size, then the structural strength (muscles and bones) increase by 4 times, the reason being that his strength relies on his cross-sectional area. Whereas the volume is the derivative of mass, which will increase once the cube is taken. This will increase the weight by 8 times. If this scaling process is reversed, say a human was 6 ft tall and is now somehow made to shrink to 3ft tall, then the structural strength will reduce to a quarter along with a decrease of mass by 1/8 times.

And if this tiny creature is falling from a significant height, here are the factors we need to consider in order to imagine its fate. We know that air resistance will be dependent on the surface area and velocity of the falling object. Moreover,  gravity acts on the weight of that object. The terminal velocity associated with all falling bodies depends on the mass of the body and the air resistance. We also know the equation F=ma

Hence, it becomes fairly easy to contemplate that the deceleration for the body of an ant amounts to a very small force, due to a small value of its mass and terminal velocity. It is easy to imagine as it would be for a feather to fall, it might drift from a straight line of the path with little to no bodily harm to the ant once landed.

Talk about “On Being the Right Size” which is a poetic essay written by J.B.S. Haldane, in 1928 in reference to the discussion at hand.