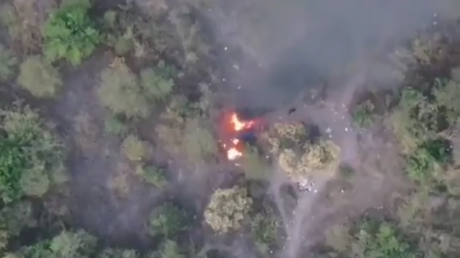 According to reports, many video footages have surfaced showing a drone tied to a prominent Mexican drug cartel dumping several bombs on unarmed individuals. The film comes amid an upsurge in bloodshed in Mexico, as well as an increase in the complexity of aerial strikes, as gangs battle for control of the illegal but lucrative narcotics trade.

Various versions of the clip have circulated online, including press reports that show the drone dropping bombs on a forest community. Almost all media reports blame the airborne attack on the Jalisco New Generation Cartel (JNGC), a drug cartel thought to be Mexico’s most violent and responsible for a wave of homicidal violence in the same Michoacán state as the blasts.

The JNGC, formed in 2009, is keen to increase its influence over an estimated 30% of all drug activity in Mexico. Though its leadership has initially been loyal to the Sinaloa cartel, the capture and imprisonment of that group’s boss, Joaqun “El Chapo” Guzmán, left a void that the JNGC has lately hastened to fill.

Mexican drug gangs have long used drones, but recent bombing attack shows a new degree of competence. Authorities decided to charge a couple of JNGC members detained in possession of a drone for suspected use in strikes last April. The judgment came less than a week after two Mexican police officers in Michoácan were hurt by a UAV carrying a restricted charge of C4, which was believed to have flown into its human targets.

However, unlike previous drug cartel drone strikes, the UAV in this week’s footage demonstrates that its operators have developed sophisticated means for dropping several explosives from a tremendous height. This aligns Mexican gangs with combatants in Iraq, Syria, Yemen, and Ukraine, who are increasingly using retail drones to carry out fatal aerial operations.

The suspected drug cartel drone dropped forest bombs on Monday, following two reported explosive strikes in settlements near Tepalcatepec, Michoacán. These were part of a recent increase in gang violence between rival organizations, frequently targeting innocent citizens. Due to the escalating slaughter, some villages and cities have been compelled to relocate to more remote areas. According to reports, from January to October 2021, more than seven people were massacred on average each day in Michoacan.