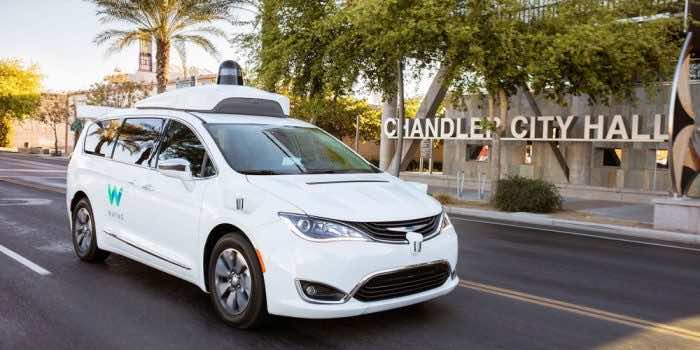 Seems like a story straight out of 2077 as a self-driving taxi goes out of control and proceeds to block the whole road in Chandler, Arizona. Just another example of how AI just isn’t advanced enough to drive on its own with human supervision. Good thing the taxi choose to stop instead of driving up a tree. The incident was caused by a minivan of Waymo, which is a self-driving vehicle development company.

Remember Delamain from Cyberpunk? Kind of like that without the angry AI screaming in your ears. The autonomous minivan got stuck in traffic and eventually blocked a three-lane road. The whole incident was recorded by YouTuber Joel Johnson, who uploaded the video on his channel named JJRicks Studios. Johnson was in the backseat and usually many of his videos consist of him showing his experience of Waymo to the viewers.

He got more than what he bargained for this time. The minivan halted in the street after it saw orange safety cones. This confused the car for some reason causing it to stop entirely. According to James in the video, “I don’t think it’s going to take this turn. We might be stuck”. You can see the full video below.

Johnson called Waymo’s roadside assistance team as soon as he realized that the car wasn’t going anywhere. Surprisingly while waiting for the team, the car suddenly started moving and proceeded to take a right turn, only for it to stop again as soon as it saw the orange cones again. Seeing this, Johnson said that “I don’t think it was supposed to do that. Oh no. Now it’s blocking the entire road”.

You can imagine how embarrassing the situation might have been for Waymo considering they are a self-driving car company and their car failed to do just that. This also strengthens the suspicions people have about self-driving cars in general.

Waymo currently has over 600 cars and over 300 of them are operating in Arizona. However, the only thing stopping them from reaching the stars is an orange cone.