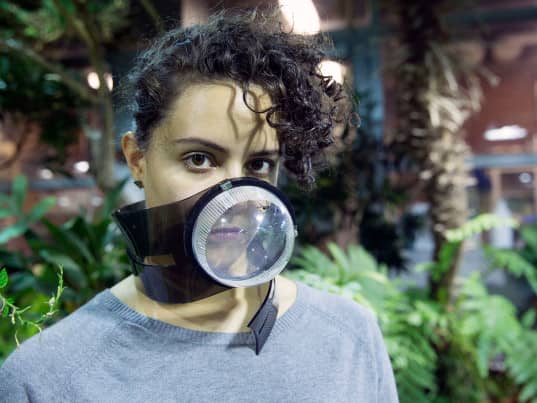 It may remind you of Bane’s mask from The Dark Knight Rises. However, it is less horrific and much cooler than Bane’s mask as it cleans the air around you.

The mask uses a spider’s web to filter air; so if you are an arachnophobe, this is probably not for you. A team of students from the University of Pennsylvania suggested a “couture” air mask that would use spider webs to filter out air pollutants.

The idea of a couture mask housing a living spider spinning a web was proposed at the Biodesign Summit in NYC.

Why spiders? Because the glue that holds the spider web has electrostatic properties and the sticky stuff can act as an efficient, industry-level sensor.

Scientists in the team said:

“We figured that if spider webs are capable of catching pollutants that are present in the air, we could propose them as a natural and biodegradable alternative to wearable air filters, while at the same time creating a new symbiotic relationship between humans and spiders”.

The mask called “Stabilimentum,” will act both as a health aid and a fashion accessory. The dome-shaped chamber encases the webs to trap pollutants.

Cartridges, once empty, can be replaced by reattaching them to the spider habitat. The real issue is practicality as it takes 2.5 months to spin enough webs to fit in 30 cartridges.

Would you try this health aid-fashion accessory? Do you think it is cool?