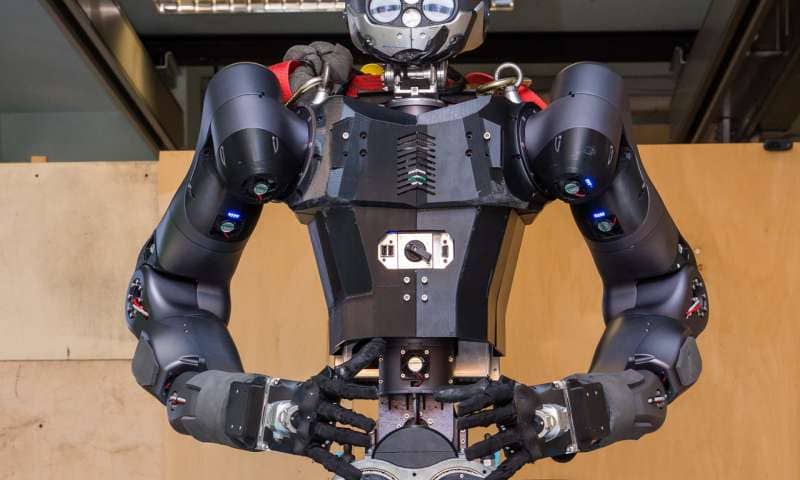 The Italian Institute of Technology’s (IIT) WALK-MAN humanoid robot is the robot that will be helping humans in disaster situations in the future. It is now one step closer to its goal and a new video released by IIT shows an upgraded version of the robot. It navigates a validation scenario which was designed to mimic an industrial plant after an earthquake. The room also contained an imaginary gas leak and a fire.

WALK-MAN first opens the door and enters the room before locating the valve responsible for the gas leak and then moves debris before operating the fire extinguisher. The new version has a lighter, more compact upper body. It is six feet tall and weighs 102 kgs and can carry up to 10 kgs in each of its two arms.

The new design makes it easier for the robot to maintain its balance and navigate through tricky passages as IIT stated in the press release. It also improves the energy efficiency and the newly designed WALK-MAN can operate for two hours on the 1 kWh battery.

The humanoid isn’t fully autonomous and functions as an avatar. WALK-MAN project lead Nikos Tsagarakis told IEEE Spectrum that a human wearing a suit equipped with sensors controls about 80 percent of its actions. However, the team does hope to increase the autonomy so it can take actions more quickly.

In disaster situations, time is of the essence and any step that can minimize the time to take action will be welcome. Even in the present form, the robot will be a good addition to rescue teams as it would allow them to address a disaster scenario without actually putting their lives on the line.

You can watch the video below: