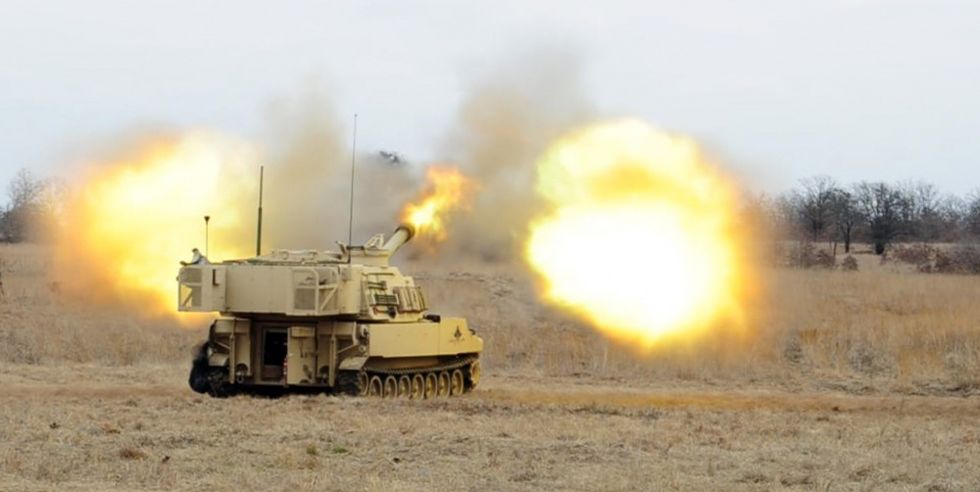 The US Army is busy working on a new kind of artillery shell that will be capable of locating enemy targets, including tanks and armored vehicles that are moving. The shell has been named Cannon-Delivered Area Effects Munition (C-DAEM). The C-DAEM has been designed to replace the older weapons that leave behind cluster bomblets, which are unexploded on the battlefield, thus posing a serious threat to the civilians.

C-DAEM has been designed to hit targets even when the GPS is jammed, and the friendly forces are unsure about the enemy’s location. It is quite difficult to hit tanks and armored vehicles using artillery from long range. However, DPICM made it easy. Army has discarded the DPICM because the unexploded munitions were becoming a hazard to the civilians. The new weapon to replace the DPICM is C-DAEM that can intelligently seek out enemy targets on its own.

C-DAEM is an improvement of the Army’s Excalibur 155-millimeter artillery round. Excalibur is a GPS-guided artillery round that is capable of taking out targets that are dozens of miles away by making use of the Global Positioning System. Raytheon – defense contractor and manufacturer of Excalibur – has claimed that it can land within a radius of 6.5 feet of the target. This radius is small enough to hit or cause damage to a stationary armored vehicle.

C-DAEM, on the other hand, will be able to hit the moving armored vehicles and tanks. This is a feat that the existing artillery shells are unable to do, and this is what sets C-DAEM apart. It will be able to seek and destroy enemy targets when the precise location is unknown. New Scientist explains, ‘The weapons will have a range of up to 60 kilometers, taking more than a minute to arrive, and will be able to search an area of more than 28 square kilometers for their targets. They will have a method for slowing down, such as a parachute or small wings, which they will use while scanning and classifying objects below.’

The latest artillery round will also be capable of performing its duties in the GPS-denied environments. For those of you who do not know; a GPS-denied environment is where the enemy has locally interfered with the GPS. As of right now, the US Army relies quite heavily on the GPS-guided systems but is trying to operate without it as well. C-DAEM is a 155-millimeter artillery shell that will be available for the M777 towed howitzer, the M190A6 Paladin self-propelled howitzer, and the new XM1299 self-propelled howitzer that has a range of 43 miles. The first iteration will be focused on hunting tanks and armored vehicles whereas the later versions will be capable of taking out ‘lightly armored, stationary targets, such as personnel, artillery, air defense, and communications sites.’