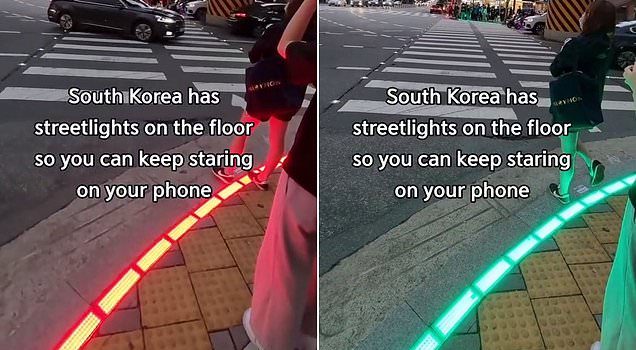 South Korea has created an intriguing device that allows its citizens to continue staring at their phones while crossing the road safely, but the notion has not received many likes.

On October 11, TikTok footage from a Seoul crossroads showed green and red lights illuminating the curbs, indicating when it’s safe to cross the road, even if you’re staring at your phone screen.

Recently, @naturalkorean has published a TikTok video of the lights eliciting a fairly mixed bag of reactions. Theoretically speaking, it is a great idea to protect people too absorbed in social media to notice their surroundings; however, this type of reckless behaviour should not be encouraged. The video shows a swarm of ‘smombies’ or ‘smart phone-obsessed zombies’ who are glued to their phones as they cross a major downtown street. The scene made me nervous, even as someone who has run into strangers when smombie-ing around.

In 2019, these in-ground LED signal lights were placed in Seoul, South Korea. Supposedly intended as a trial, the lights appear to have evolved into a more permanent solution to the problem of ‘smombies’.

In 2019, the South Korean government also implemented an alarm system that sends a notification to phones when pedestrians are ready to step into traffic. “Increasing number of smombie accidents have occurred in pedestrian crossings, so these zombie lights are essential to prevent these pedestrian accidents,” Kim Jong-hoon, senior researcher at the Korea Institute of Civil Engineering and Building Technology, told E&T.

The bizarre concept has split the internet, with some claiming it’s a brilliant idea and others claiming it’s simply increasing phone addiction. Although the idea is sort of clever, one commenter couldn’t understand why “people must stare at their phones 24/7 while walking.” Another claimed that the government is ‘normalising walking while on your phone,’ which is ‘not okay at all.’

“I can’t believe some people care about their devices more than their life,” one user wrote on the app.

However, other people believe this ingenious traffic idea has some significant advantages, with one person stating that it would be “excellent for introverts and persons with social anxiety.”

Another commended South Korea’s ability to “adapt to the people without judging,” claiming that this is “how society should work.”