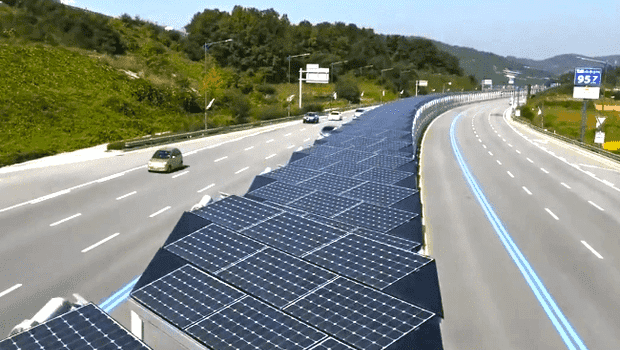 Governments all over the world are endeavoring to incorporate green practices and systems in their countries so they may contribute to creating a sustainable future for the posterity. At present, accelerated industrialization, deforestation for residential or commercial purposes, and increased accessibility of people to cars and other vehicles has amplified all kinds of pollution. If this is not controlled, we will be heading towards a dark and dilapidated atmosphere, barely suitable to support life.

South Korea, among other countries, has taken a giant leap in using renewable energy for power generation. It has introduced an innovation in form of a bike lane installed in the middle of the regular highway and is being called a bike highway. This 32 km long lane is sheltered which protects the bikers from the harmful and intense rays of the sun. Moreover, its roof is covered with solar panels which also generate electricity.

Such precedence of clean energy project was earlier seen in the Netherlands with the name of SolaRoad. This bike highway is located between three lanes of traffic on each side and yet shows safety for the cyclists. Moreover, the energy generated is enough to power the light system at the entire highway and to provide energy for charging stations of vehicles.

The highway connects Daejon and Sejong for cyclists. The cyclists enter and exit the highway through the tunnels that separate the other traffic from bikes. There are, however, a few restraints in the model and they may be overcome in the future. These include a probability of collision between the bikers and the traffic before entering or exiting the tunnel at some point. Also, noise pollution and air pollution from heavy traffic from both the sides can lead to an unhealthy and unpleasant biking experience for bikers when they are crossing the highway.

Nevertheless, it is an appreciated initiative, and we hope to see likes of this in future.