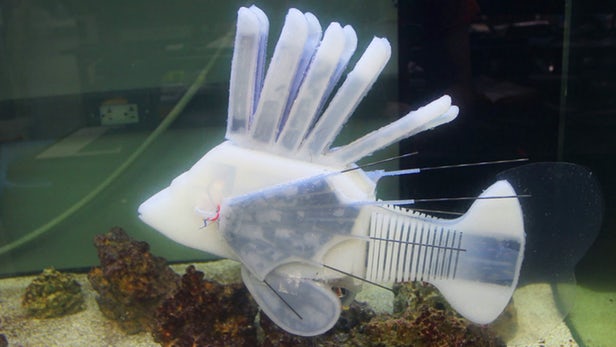 What you are looking at is a robot fish measuring 40 centimetres in length and made using a soft and rubber-like material. It is propelled by making use of a double-function liquid. The liquid is pulsated through the fish’s body via basic circulatory mechanism quite similar to blood and has been named ‘robot blood’.

What makes this robot fish extremely cool is the fact that is doesn’t need an isolated battery unit. The battery function has been incorporated into the body of the robot, and this provides the advantage of reducing weight while also improving maneuverability. The movement of the liquid helps with the propelling of the fish while retaining its buoyancy. The engineers that have developed this robot fish call it an electrolytic vascular system for energy-dense robots.

The team said, ‘Modern robots lack the multifunctional interconnected systems found in living organisms and are consequently unable to reproduce their efficiency and autonomy. Energy-storage systems are among the most crucial limitations to robot autonomy, but their size, weight, material and design constraints can be re-examined in the context of multifunctional, bio-inspired applications.’

The final goal of the team is to create something as close as possible to a self-generating energy source that would be able to carry out the operation by mimicking the living beings’ circulatory structure. The fish moves very slowly and is designed as a step towards robotic autonomy rather than tasking the fish to perform a task.

One can only imagine the advances that can be made once these vascular innovations find their way into the systems of more functional robots such as SoFi. SoFi was created by a team of scientists for assisting with underwater research. The robot fish is capable of swimming with the real fish, thus providing new insights into the life that exists under the sea.

Such collaborations can really bring about a change in how we make use of robots in our lives. What do you think?