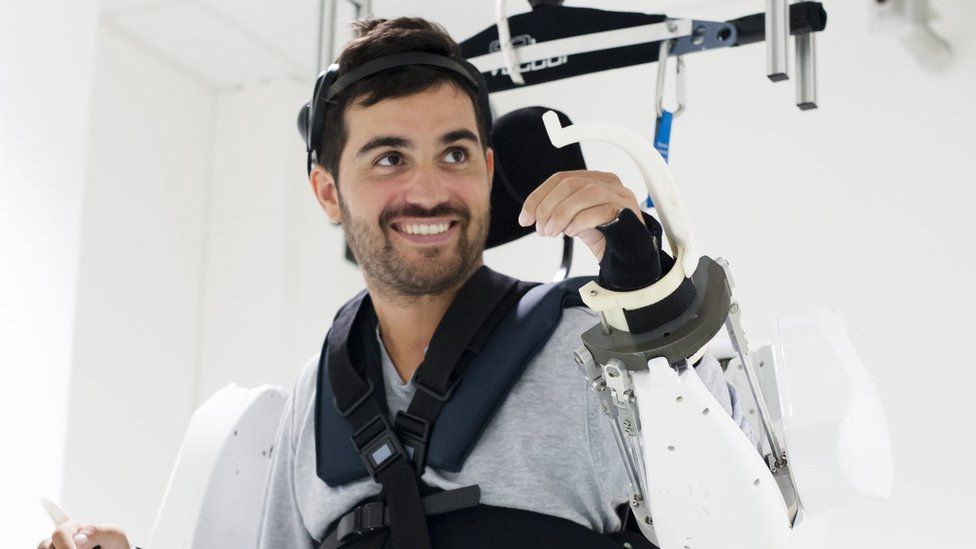 A quadriplegic man was able to walk once again all because of a brain-controlled robotic exoskeleton suit. The suit has so far only been tested in a lab but allowed the patient to regain control of his arms and hands. The patient is from Lyon, named Thibault. He had fallen 12 meters from a balcony four years ago and was left paralyzed from the shoulders down.

Professor Alim-Louis Benabid, President of the Clinatec Executive Board, a CEA laboratory, and Professor Emeritus from the University of Grenoble, France, said, ‘Ours is the first semi-invasive wireless brain-computer system designed for long term use to activate all four limbs. Previous brain-computer studies have used more invasive recording devices implanted beneath the outermost membrane of the brain, where they eventually stop working. They have also been connected to wires, limited to creating movement in just one limb, or have focused on restoring movement to patients’ own muscles.’

To enable Thibault – a quadriplegic patient – to regain these movements, the researchers implanted two recording devices on the brain’s surface and used them for collecting and transmitting brain signals. These signals were then decoded using an algorithm that sent commands to the exoskeleton. Thibault had to undergo training for months, during which he used his brain signals for controlling a video game avatar before he was ready to take on the exoskeleton. Once he had been fitted with the suit, he could walk slowly and stop at his own discretion thus achieving quite an impossible feat for a quadriplegic person.

By making use of the suit and the avatar, he was eventually able to progress to being able to use both hands for touching targets on the cubes 16 months after the surgery. Thibault says that he feels like the first man on the Moon. As of right now, the suit cannot be used outside of the laboratory since it relies on a ceiling harness, but it remains a huge step forward for quadriplegics. Professor Stephan Chabardes, a neurosurgeon from the CHU of Grenoble-Alpes, France said, ‘Our findings could move us a step closer to helping tetraplegic patients to drive computers using brain signals alone, perhaps starting with driving wheelchairs using brain activity instead of joysticks and progressing to developing an exoskeleton for increased mobility.’