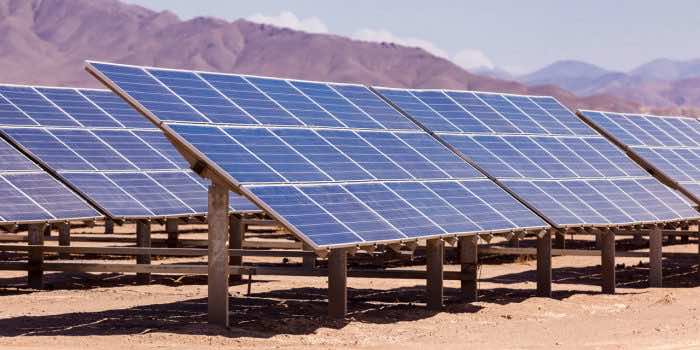 Solar panels have revolutionized the energy sector. Today, they are common at homes, offices, industries, and whatnot. However, there is a problem related to their maintenance. They are installed at quite a height and with time, dust, dirt, and other debris are collected on them. Cleaning them manually is not as easy. That is why there is a drone launched that will clean these panels.

The “drone-in-a-box”-type system is being developed through a collaboration between Israeli solar farm services company Solar Drone and Israeli drone manufacturer Airobotics.

The drone will have a quadcopter housed inside a weatherproof docking station located near the solar panels that will need cleaning. At regular intervals, two doors on top of the station will slide open, the drone will rise out of it on a powered platform, and the aircraft will then take off and fly up to the panels.

This concept has applied a lot of technological innovations. Among these are LiDAR sensors and mapping cameras. The drone will subsequently align itself above each panel, then spray it with cleaning fluid before moving on to the next one. Once it is done with the cleaning, its work is done, and the drone has achieved its objective. Now, the aircraft will land back on the docking station and be lowered into it. If there is a need for a recharge, a robotic system will replace its battery with one that’s freshly charged and replace its cleaning fluid tank with one that’s full.

Solar Drone states that this system will be 25 percent less expensive than using other panel-cleaning techniques. And unlike at least one previously proposed drone-based setup, the aircraft won’t actually touch the panels, so there’s little chance of it damaging them.

The information on the drone is not available in the market at the moment and is yet to be disclosed.