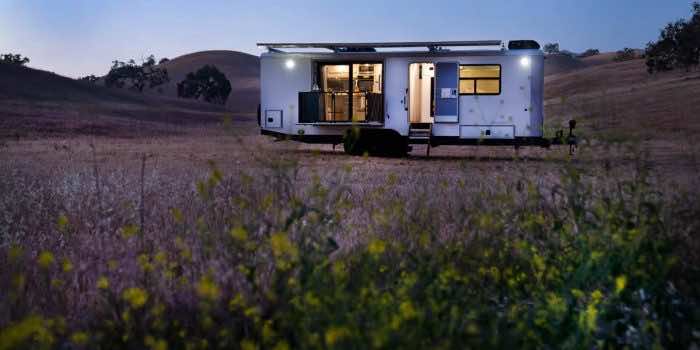 The sophisticated living vehicle is one of the most incredible blends of technology that has ever been built. With an outstanding capacity of the electrically powered battery and a solar charging capacity of up to 3400 watts, this 2023 model of the latest off-grid vehicle has come up with some of the most exciting features that will be worth your money.

The most notable feature of the new model is its ability to generate clean drinking water from humidity conditions that are prevalent in the environment. This means that, whether you are stranded in a desert or traveling in a dry place, you will never be devoid of drinking water. This is amazing, isn’t it?

The mechanism behind this water technology is the use of a “Watergen atmospheric water generator (WAWG),” which draws out moisture from the atmosphere with the help of a small fan, which will then be extracted through condensation. This condensed water would then be passed through a series of filtration steps that extract any impurities from it and make it drinkable. The clean drinking water will then come out through a tap installed.

This Watergen AWG system can produce up to 19 liters of water per day, which is more than enough for a family even if each member drinks 2 to 4 liters of water individually. This living vehicle has the capacity to house 6 people, and they can all use this water for drinking as well as for cooking. However, the phenomenon of having a water tanker in such types of living vehicles is not rare. Even off-grid RVs like the “Bruder EXP 6” and the “Bliss Mobil” have this integrated technology from which they can easily pull water from lakes or streams by parking the vehicles at the shores.

That water was also purified and drinkable, but the essence that this latest off-grid living vehicle possesses is the one and only. The process of extracting moisture from the air through its Watergen AWG technology, then purifying it, and then using it for drinking has remained one of the best techniques for water generation in this type of vehicle. This technology has no limitations because the moisture is already present in the atmosphere. One thing to note is that the system requires at least a 20% humidity level in the air, which is always available. Even the driest locations in the U.S. have humidity levels of 30% on average. Hence, it’s a win-win situation.

Some prevalent features of the base model include the battery, with a range between 14.4 kWh and 57.6 kWh. It also contains a 5.5 kW propane generator as a backup system.

Coupled with this, the Watergen AWG system has a price of US$25,995 as per the company. However, the entire living vehicle’s 2023 model integrated with this Watergen AWG system starts from the base price of $339,995, set for the year 2023. You can also customize the manufacturing process of your living vehicle, with the production time estimated to be about 10 to 12 months.