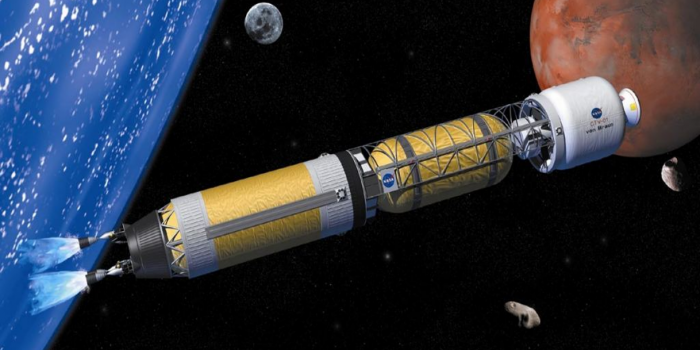 NASA spent decades exploring nuclear propulsion amidst an ongoing space race. NASA restarted its nuclear effort a few years ago to produce bimodal nuclear propulsion – a two-part system comprised of an NTP and a NEP element – that may permit 100-day transits to Mars.

NASA selected a nuclear concept for Phase I development as part of the NASA Innovative Advanced Concepts (NIAC) program for 2023. This novel type of bimodal nuclear propulsion system employs a “wave rotor topping cycle” and can potentially shorten transit times to Mars to 45 days.

Prof. Ryan Gosse, the Hypersonics Program Area Lead at the University of Florida and a member of the Florida Applied Research in Engineering (FLARE) team, presented the idea under the title “Bimodal NTP/NEP with a Wave Rotor Topping Cycle.”

The NAIC chose Gosse’s proposal as one of 14 for Phase I development this year, which includes a $12,500 grant to help the technology and procedures involved mature.

Nuclear propulsion ultimately boils down to two concepts, which rely on extensively developed and validated technologies. First, the cycle for Nuclear-Thermal Propulsion (NTP) comprises a nuclear reactor heating liquid hydrogen (LH2) propellant, converting it to ionized hydrogen gas (plasma), which is then funneled via nozzles to generate thrust.

Several attempts have been made to create and test this propulsion system, notably Project Rover, a 1955 collaboration between the United States Air Force and the Atomic Energy Commission (AEC).

Nuclear-Electric Propulsion (NEP), on the other hand, uses a nuclear reactor to generate electricity for a Hall-Effect thruster (ion engine), which creates thrust by ionizing and accelerating an inert gas (such as xenon).

The clever concept of Gosse combines the advantages of NTP and NEP. A NERVA solid-core reactor with a specific impulse (lsp) of 900 seconds is the basis for the bimodal design that he suggests. That is twice as effective as chemical rockets currently on the market.

The thrust levels will also be comparable to those of a NERVA-class NTP concept, but with an Isp of 1400-2000 seconds, claims Gosse.

“Coupled with a NEP cycle, the duty cycle Isp can further be increased (1800-4000 seconds) with minimal addition of dry mass. This bimodal design enables the fast transit for manned missions (45 days to Mars) and revolutionizes the deep space exploration of our solar system,” he said.

A crewed journey to Mars might last up to three years using current propulsion technologies. These missions would launch every 26 months (when Earth and Mars are closest) and travel for at least six to nine months. A travel period of 45 days (six and a half weeks) would cut the whole mission time down to months rather than years. This would considerably lessen the key risks connected with Mars missions, such as radiation exposure, microgravity time, and related health concerns.

New reactor designs are being proposed in addition to propulsion for long-duration surface missions where solar and wind power are not always available.

Crewed missions to Mars and other deep space locations may one day be possible thanks to more sophisticated nuclear applications.