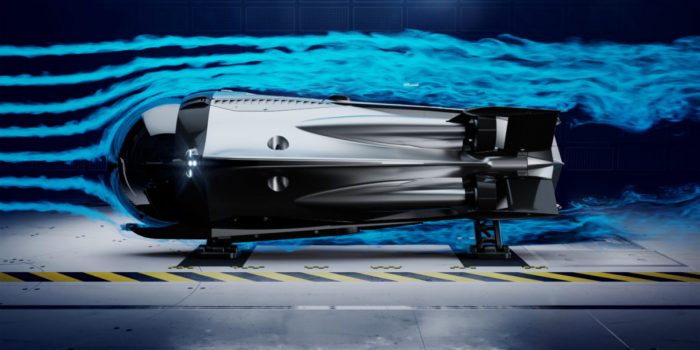 Super Sub is an ultra-luxury, all-electric, three-person submersible that is now seven knots faster than the regular submarines, as confirmed by its manufacturer, U-BoatWorx.

It is a Netherlands-based manufacturer of submersibles with radical designs, such as the submersible yacht that can stay underwater for up to four days.

Back in 2021, U-Boatworx claimed that the Super Sub was the most hydrodynamic sub on the market. It is a droplet-shaped sub with a long tail and specialized wings, powered by four 60kW thrusters.

Its acrylic hull gives extensive panoramas of the ocean waters. Its submersible is large enough just for three people to take a dive into the depths of the ocean.

If you are looking for a more private getaway, then you should look at Project Hercules.

The submersible is powered by lightweight lithium-ion batteries that can deliver 9.9 tons (9,000 kg) of thrust. This can result in a top speed of eight knots, which is faster than that of a bottlenose dolphin.

According to the recent press release, the team at U-Boat Worx has collaborated with MARIN, the Dutch maritime research institute which specializes in computational flow dynamics to have a more efficient design.

It can perform 30-degree climbs and dives and a depth rating of 984 feet (300 m). The Super Sub allows its passengers to swim with the bottlenose dolphins and many other creatures in the sea.

The superfast Super Sub was introduced only in 2021, and U-Boat Worx has claimed that the first piece of the design is already sold. The submersible maker plans to carry out sea trials of the Super Sub in the spring of 2023. This might be the best time to identify who owns the magnificent vehicle.