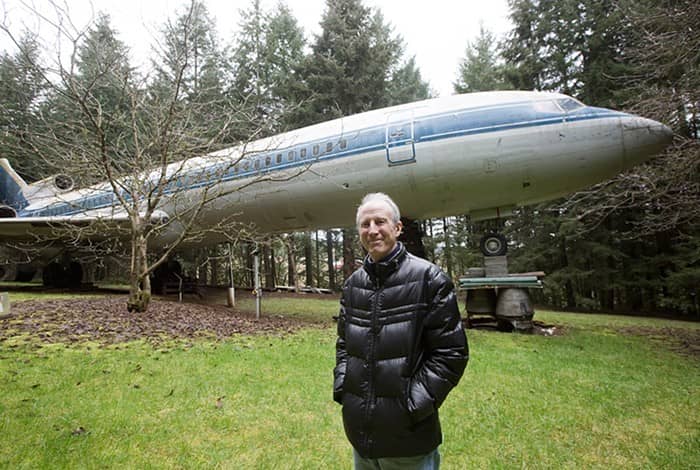 Finding an airplane in the middle of the woods is not always because of a plane crash. Especially when creative and inventive people like Bruce Campbell are around. Bruce is a retired electrical engineer and built a home in an airplane in Hillsboro, Oregon. He likes to turn planes into beautiful masterpieces that would otherwise become scrap metal. He believes that airplanes can have so much potential to be used even after they have retired. He used his imagination, an old airplane and a good piece of land to create the unique home on Earth. Bruce was in his early 20s when he purchased a 10-acre piece of land for $23,000 in the forest of Hillsboro, Oregon. From a very young age, he was fond of tinkering with old objects and creating new items from it. His idea was to create a home on the land that he purchased but the plan changed when he saw that another house has already been built there. He heard about Joanne Ussery, a hairdresser from Mississippi who bought a Boeing 727 plane and transformed it into her home. He was inspired by the idea and thought that buying a large plane is much better and innovative to build a home in. Since he firmly believed that airplanes should be saved from turning into scrap metal, he was up for the idea. He already owned 10 acres of land but needed money to buy and bring a plane to Oregon. In 1999, he bought a Boeing 727 aircraft for $100,000. Transporting the plane from Athens, Greece, to Oregon cost him another $120,000 and made the total cost $220,000. To transport the plane, they had to take its wings off. Once the plane reached its destination, he installed the wings again. Campbell believed that his new idea would be just a ‘work in progress,’ but it changed into something much more than that after several years of hard work and innovation. He worked on the plane for many years while living in a freight van nearby. However, the van became infested with mice and Campbell was forced to move into the aircraft without getting a building permit. That’s when he understood how spacious the plane was. Campbell declared about his vision one day that “shredding a beautiful and scintillating jetliner is a tragedy in waste and a profound failure of human imagination.” He said that some people find it strange to have a plane in the middle of the woods but to him, it feels natural to live there. He believes that the aircraft has an “engineering grace unmatched by any other structures people can live within.” He never drew plans for the interior of the Boeing 727 but when he moved in, everything became clear to him. Giving an interview, he said, “Next time you’re in a jetliner, close your eyes for a moment and remove all the seats, all the other people from your mind. Then open your eyes with that vision and consider the expanse of the living room. It’s a good environment; it is.” He washed off the interior of the aircraft using pressure water spray. It took him four days to wash it. The exterior also needs to be washed every two years. He says that every plane is destined to become an aerospace class castle for anyone. He said, “If a conventional home is a legacy age family Chevy or Ford, an airliner is a fresh new Tesla or Porsche Carrera.” He propped his Boeing 727 airliner on concrete pillars with his driveway. If anyone visits the area, they will notice the amount of work that has been put into the airplane. Campbell used all the equipment which was already present in the plane. However, he changed things by restoring the modifying the interior of the aircraft to make it fit to live in every day. To him, his home is a constant work in progress while being a fully functional home. To enter the Bruce Campbell’s Boeing home, they need to use the airplane’s original fold-down stairwell. There is a shoe rack with many pairs of slippers for visitors. He prefers people to wear socks and slippers inside the aircraft to keep it clean. He only wears slippers and socks to move inside his house. The plane has plenty of space, but Bruce is living a modest lifestyle inside the plane. He sleeps on a futon, cooks with a microwave and toaster. He mainly eats cereal and canned food and constructs lots of makeshift equipment. The aircraft also has two working toilets, however, the coolest part is its shower. It is built near the tail of the plane. The cockpit has all original instruments and now works as reading and entertainment area for Campbell. He said, “It’s a great toy. Trick doors, trick floors. Hatches here, hatches there. Star Trek movies in a Star-Trek-like setting. Having lots of little toys enclosed in a very big toy is nirvana.” He mostly works on his computer at his workstation where he plans to improve the design of his home further. He said, “I think most people are nerds in their hearts in some measure. The point is to have fun.” He built his water and lighting system. He repaired the original LED lights which prove more environmentally friendly. Campbell is also planning to duplicate his project again in Japan with a Boeing 747. He plans to purchase a retired 747 and built another home in Japan. He believes that his life’s purpose is to make a difference in the world for humanity and the environment. The thought about recycling planes gets him all excited. He said, “My goal is to change humanity’s behavior in this little niche.” He is happy to let curious onlookers and tourists stop by and check out his abode. He also arranges several events all over the year. He organized a concert on the wing of his plane on the grassy area as well. The plane Campbell used to construct his home in Oregon is a Boeing 727-400 model. It is the only aircraft which was built with three engines and can seat 149 to 189 passengers. Today, only Iran Aseman Airlines are still operating three 727-200s for commercial services.