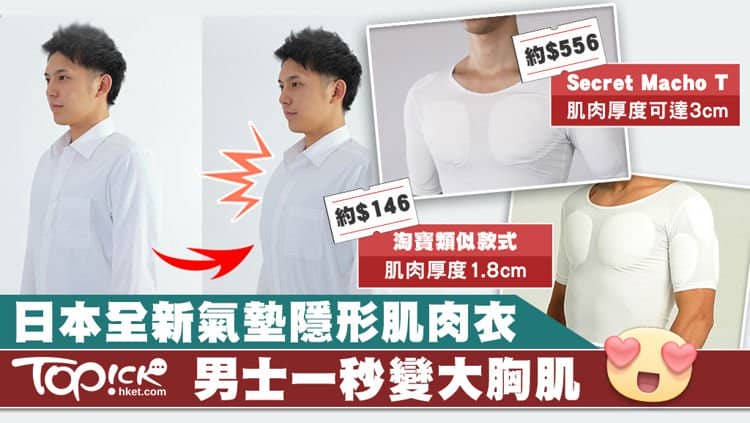 If you live in Japan and are looking to don that slim and macho look, then you are in luck! Secret Macho T is a special undershirt that instantly provides the wearer with a buff physique. The Secret Macho T has been created by a Japanese company known as ‘His Company Group’.

The Secret Macho T has inflatable airbags that are inserted into small pockets that are affixed around the chest and upper arm areas. They are responsible for providing a visual enhancement of the wearer’s chest, biceps, and triceps. The best thing about the Secret Macho T is that you get to choose the level of inflation of airbags. This means that you can choose between the ‘gym beast’ and moderately toned body look.

As per His Company Group press release, the Secret Macho T undershirt took its inspiration from the silicone bra inserts that some women don to appear more attractive. The company took the same concept and then applied it to an undergarment for men. According to the manufacturer, the Secret Macho T caters to a variety of individuals including those who suffer from a complex about their skinny body, those who lack the time/discipline to tone up by working out, people who spend a lot of time in public, cosplay fans, and those who want to get buff right away!

As of right now, Secret Macho T is being sold on Amazon for $73. It is definitely not the cheapest undershirt, but it can definitely help you make an impact during an event. Oh, by the way, it is on sale right now and can be bought for a price of $45.5. The shirt has already been featured on Japanese television.

What do you think of this amazing undershirt by His Company Group? Do let us know!