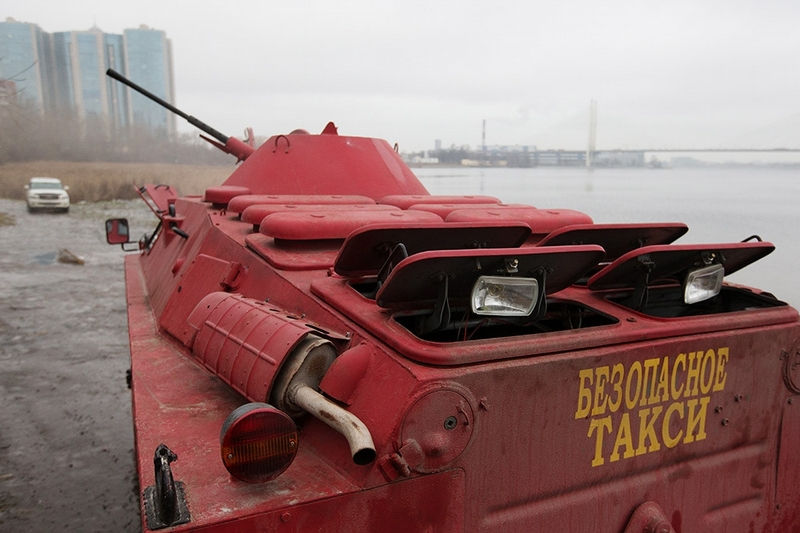 If you’re moving around in St. Petersburg and see a red colored BRDM-2 Combat Command Reconnaissance Vehicle coming towards you or stopping near you, do not panic. Instead, step into it confidently and tell the driver where you wish to go because it is a taxi! Yes, it is a taxi, indeed. The vehicle was once an armored vehicle in use by Soviet Union military. Now it is conquering the streets of St. Petersburg and despite the paint, you can make out its military design and the turret gun, deactivated of course. It was created during 1963 and 1989 and is known quite well for its ability to tackle any sort of terrain. It was armed with a 14.5mm Vladimirov Heavy machinegun and a 7.62mm Kalashnikov’s tank machinegun back in the day. The current owner of BRDM had to go a long way to convince the authorities before he was granted a permit for using the vehicle as a taxi. He was finally given permission, but, on a certain set of conditions. The vehicle’s camouflage had to be changed to a civilian look per say and certain streets have been termed as no entry zone for this vehicle because of its size and weight. Why use it as a taxi? Well, the vehicle comes with a number of advantages over regular taxis. It is quite spacious and possesses amphibious properties, which means it can carry people across the Neva River and this comes really handy during the ‘white nights’ in St. Petersburg. The owner didn’t change the interior of the vehicle. A single ride costs about $100, however, the price is justified since tourists and newly wedded couples are the intended clientele. Check out the video below to see the taxi in action!