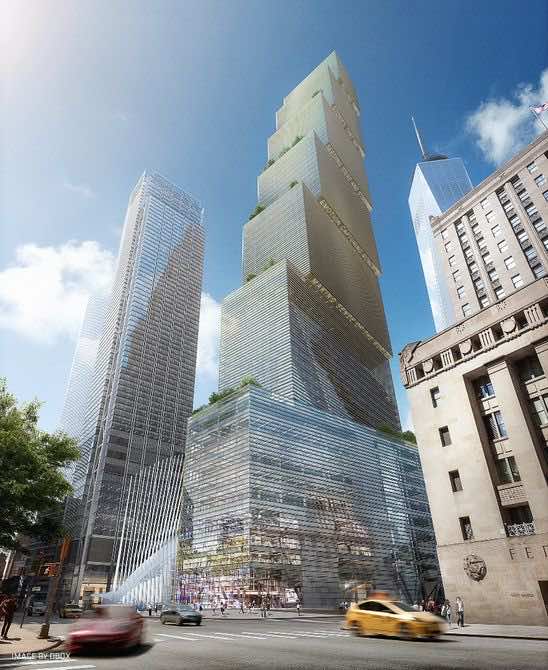 Bjarke Ingels Group (BIG) from Denmark has shown off the preliminary plans and renderings for the Manhattan’s Two World Trade Center. This is the fourth and final skyscraper scheduled for the World Trade Center site. As expected from a firm like BIG, the design sure is eye-catching and once completed, may very well become the most wonderful building in the locality.

Originally, Foster + Partners were given the go ahead for this project, however, James Murdoch who will be taking the control of 21st Century Fox from his father didn’t like the design. Foster + Partners had already laid down foundations though. Since 21st Century Fox and News Corp will be leasing the entire bottom half of the skyscraper as its HQ, Murdoch’s opinion ran the day. BIG’s tower shall be making use of the existing Foster + Partners foundations and sports seven separate volumes that will be stacked atop each other. The volumes are placed like children stack toys carelessly and somewhat lean towards the direction of the One World Trade Center. The building has been aligned so as to not hamper the existing views of St. Paul’s Chapel.

The building, 80-plus storey, will rise to a height of 1,340ft and shall offer 260,000sq.m of usable floor-space. The unique volume stacking will also result in the creation of 38,000sq.ft of outdoor terrace space that shall be used for greenery and choice views of Manhattan. The interior of the building will be focused on big and open collaborative spaces that will encourage inter-office sharing. It will also include informal meeting areas, television studios, restaurants and leisure areas (basketball courts and a running track). There is no word from BIG about the date of completing. However, there are reports that it will be completed by September 11, 2021.