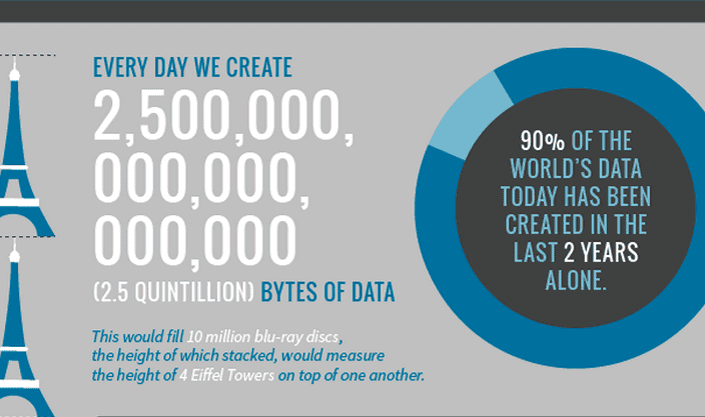 Remember when we had to manage our lives with those small hard drives where even 4GB of disk space was considered a “sweet spot” back in 1998. The only reason we could fit our vast information even in those little hard drives is that we did not produce as much information as we do today. Of all the data that exists in the world today, 90 percent was produced in the last two years. The entire world collectively produces 2.5 quintillion bytes every day, according to IBM.

The world is getting connected in more ways than we ever imagined, and the connections are just beginning to strengthen even further. The number of electronic devices used by the people is rising day by day, and no one knows what the limit might be. The fifth annual infographic called “Data Never Sleeps 5.0” released by Domo gives a detailed insight into world’s data generation and online behavior.

In just one year since 2016, the internet population has grown by 7.5 percent with the number rising to 3.7 billion users. Just imagine the amount of data all those users can possibly generate! US alone is responsible for generating 2,657,700 gigabytes of internet data every minute.

Most of the web traffic is enjoyed by websites, like Google, Wikipedia, Facebook, Instagram, Amazon, YouTube, and Netflix. You can spend a minute doing nothing and staring at the wall, but the world will be making 3,607,080 Google searches, adding 600 Wikipedia page edits, posting 46,740 photos on Instagram, and taking 45,787 Uber rides worldwide. All this data is only the tip of the iceberg, and the detailed infographic below will give you scary numbers, and leave you in a state of stress, while worrying about the future of data in the world and all the heat that so much computation is just adding to the environment.

We pretty much rely on the weather forecasts for our daily plans, and apparently, the entire world does, because the weather channel website alone receives over 18 million forecast requests every minute.

You can have a look at last year’s infographic to get a better idea of how much our online behaviors have changed in one year only.