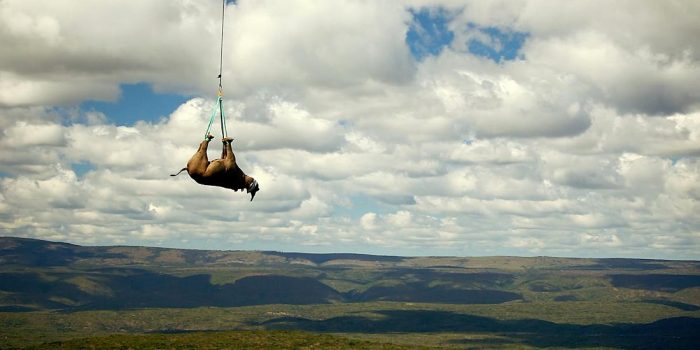 Multiple species are endangered due to multiple reasons and extreme circumstances the planet is undergoing. Among these, there are rhinoceroses as well. There are five species of rhino, and all of them are endangered.

The three-ton white rhino is the least endangered. There are only around 20,000 of them left in the wild. Recently, a study showed hanging them upside down from helicopters and relocating them could help save them. The species hung upside-down in the study is the black rhino, which weighs almost 1.5 tons and with an approximate population of only 5,000. The study in question won the Ig Nobel Prize that is awarded by the science magazine Annals of Improbable Research to honor projects that “first make people laugh, and then make them think”.

Rhinos and other bigger species are often relocated with the help of drugs or tranquilizers. These tranquilizers are not always safe for them and being unconscious for so many hours can affect their physiological and psychological health. Rhinos are being relocated by hanging them upside down but nobody had actually researched if it was a safe option.

The study compared the respiratory function and metabolic effects of rhinos when they were being relocated by staying hung-up by their ankles to the animals when they were relocated with the help of tranquilizers, lying on their sides.

The results of the study were eye-opening and astonishing. They showed that the respiratory functionality and efficiency of the animals are better than the time when they were relocated through tranquilizers and lying on their sides. Hence, the means of transport do not affect their internal bodily functions.

The method is deemed to be safe. However, it is always a tragic side to see these humongous beings going through so much just for the sake of their survival. Changing habitats and places is not easy for them. These means are used for their own good.