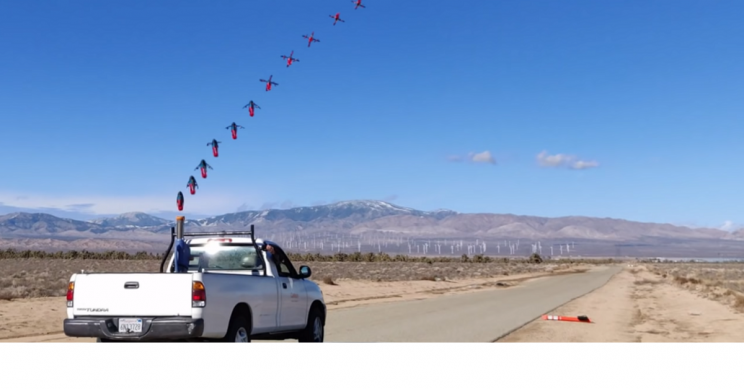 Drones have come quite a far way and are now available in a variety of shapes and sizes. They can be used for different applications and have proven their worth in the air. However, it is getting them up in the air that can prove to be tricky, depending upon the surrounding conditions. The solution comes in the form of SQUID.

A team of researchers from Caltech University and NASA’s Jet Propulsion Laboratory (JPL) have come up with an elegantly designed and eye-catching solution for this issue; SQUID – that involves launching a drone by making use of a cannon. This latest invention not only saves time but can also be employed for a number of varying situations. Furthermore, it is really exciting.

SQUID stands for Streamlined Quick Unfolding Investigation Drone. It resembles a squid and one of those spinning Nerf Vortex balls. It measures in at 27 centimeters and weighs in at only 530 grams. It features four spring rotor arms that can take a position in under a tenth of a second as soon as the drone is launched. The SQUID drone takes to the skies by making use of a pneumatic baseball pitching machine that is also called the cannon.

The cannon provides the SQUID with a starting speed of 35 mph. The four rotors start moving at a speed of 200 milliseconds once the SQUID is launched, and the drone is able to commence hovering in less than a second. With a ballistic launch, the drone is able to begin operations in a quicker manner as opposed to launching it from the conventional techniques. Furthermore, the SQUID drone comes with another benefit; it can be launched from moving objects as well.

The researchers have shared their research paper on arXiv, where they state that ‘A rotorcraft greatly expands the data collection range of a rover, and allows access to sites that a rover would find impassible.’ The team also launched the SQUID from a truck that was moving at 50 mph.