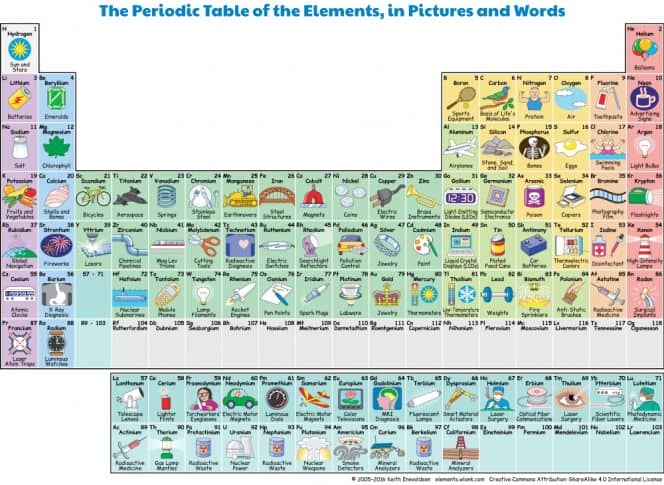 Those of us who studied science in high school and college had our fair share of chemistry. However, our chemistry with the periodic table has never been great. It could have been a different story if we had the interactive periodic table present today, which not only makes learning easier but fun as well.

The table not only lists the elements but shows the daily life uses as well.

Boron is used in practically everything ranging from sports and fertilizers to sports equipment. Even though the name sounds like moron, it’s a pretty smart element.

As the name suggests, the metal used to make coins is nickel

Manganese is something we see in action in our daily life without even knowing it. The transition metal is not only used in batteries and fertilizers but is used to make heavy earth movers as well

The element we are all familiar with. Sodium is found in every household in the form of soap. Some lesser known facts are that it is also used in making soap and glass.

Fluorine is s a reactive gas and found more commonly than you would expect. It is used in fluorescent lights, nonstick pans and even in our toothpaste.

Platinum is commonly used by scientists for their experiments in the lab. It is also used to make spark plugs in our cars and this non-corroding metal is also used in pollution control.

When we think of potassium, we think of bananas but that is not the only place potassium is found. It is also present at the end of our nerve endings and is used in gunpowder and matches.

This rare earth metal is soft and is used to make computer disks and glass filters. The lasers used for surgery are also powered by Holmium.

No, this element is not what the American flag is made up of. It’s a radioactive member of the actinide series and does not occur naturally and is normally used in smoke detectors.

If only this interactive periodic table could have been around when we were studying chemistry, we might have actually come to like it.