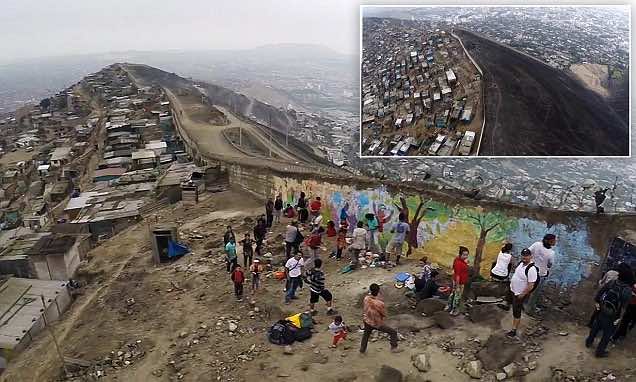 No, I am not talking a poetic wall separating the two. There is an actual wall in the South American nation of Peru totaling 10 Kilometers whose prime purpose is to keep out the “ruffians” away from the affluent parts of the Lima city. It reminds us of the Berlin wall with a concrete structure and over 10 feet high throughout. It is also covered with barbed wire and is now being called as the Wall of Shame or Peru’s Berlin Wall. The Berlin chapter of Apartheid wasn’t a social buffer, it was a political buffer between the communist and capitalist parts of the world. It remains an iconic part of the Cold War era even though it is gone and younger generations always ridicule how something this irrational could have ever gone up right in the center of the city. It turns out we have Berlin Walls in Post-Cold War era too like this one in Peru. It is such a long structure that it is easily plotted on a satellite image from space. It separates Las Casuarinas from the poor Vista Hermosa and tells a tale of blatant inequality and injustice even in these modern times. The Vista Hermosa is without basic amenities including healthcare, sanitation and clean water and with it comes to a sense of neglect, hate, and revenge. So far, the neighborhoods haven’t seen much violence, but it might be inevitable with a wall of this kind separating the two areas as if they were separate countries with heightened tensions. Just like the Berlin Wall, the Peruvians make a lot of anti-wall graffiti on it. They have called it a disgrace and social organizers have done mass protests at the site. The residents of Las Casuarinas believe the wall was just erected to decrease the crime rate in their neighborhoods. Statistically, they argued that people at the poorer end were bringing crime into the city and the residents thought a wall would regulate their movement. Does this remind you of a certain American politician with an aim to build a great wall? Hint: His name starts with Donald and ends with Trump….

The Wall of Shame recently drew attention on the media with the footage, graffiti, and slogans becoming a cult symbol in the country.

Around 30% population of Lima is living in these walled dwellings due to the rise in crime from poor areas like these. Stats like these attempt to justify the story from the other side.

But, that is no way to overcome this problem. It can only aggravate the situation. That is what history teaches us. Would someone try to educate Trump’s supporters on it too?