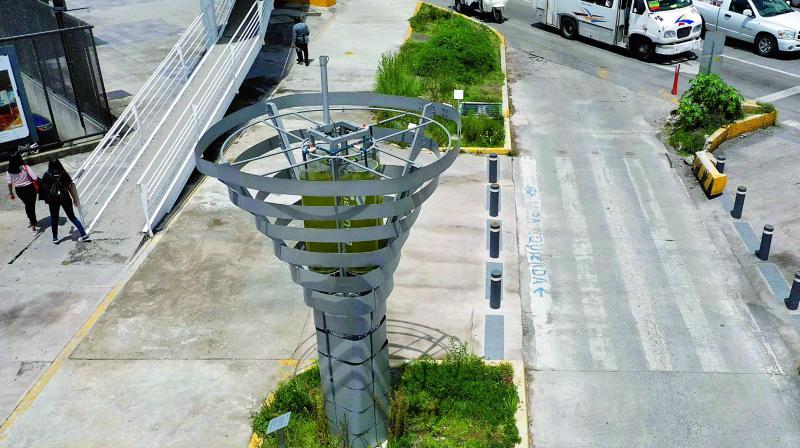 Artificial trees are ready to take over the fight and take out air pollution. As we have come to learn, humans are their own worst enemies. We are taking Earth to the point of no return when we won’t be able to breathe all in the name of advancements and development. That is where BiomiTech – a Mexican startup – comes in with its unusual creation.

Scientists have been working on different techniques for controlling air pollution. In fact, some of them are even planning to leave Earth if it comes to that. As per a new report, there is an artificial tree that can take in the equivalent amount of air pollution as 368 living trees would. This artificial tree comes from BiomiTech.

The metal structure makes use of micro-algae for cleaning carbon dioxide and other contaminants from the air while giving back pure oxygen to the environment. It has a height of about 4.2 meters and is about three meters wide. It can be best described as a cross between a tree and a high-rise building with a steel trunk. Jaime Ferrer, a founding partner in BiomiTech, said, ‘What this system does, through technology, is inhale air pollution and use biology to carry out the natural process (of photosynthesis), just like a tree.’

Ferrer further said that the goal of BiomiTech is to help cities such as Mexico City attain cleaner air in targeted areas. These targeted areas include the ones that are used by pedestrians, cyclists, or even the elderly, especially when planting a large number of trees is not a viable option. This amazing invention by BiomiTech sure seems cool, but this is the kind of effort that is becoming a common sight in China that is struggling with its ever-growing air pollution problem.

What do you think of this wonderful machine by BiomiTech?