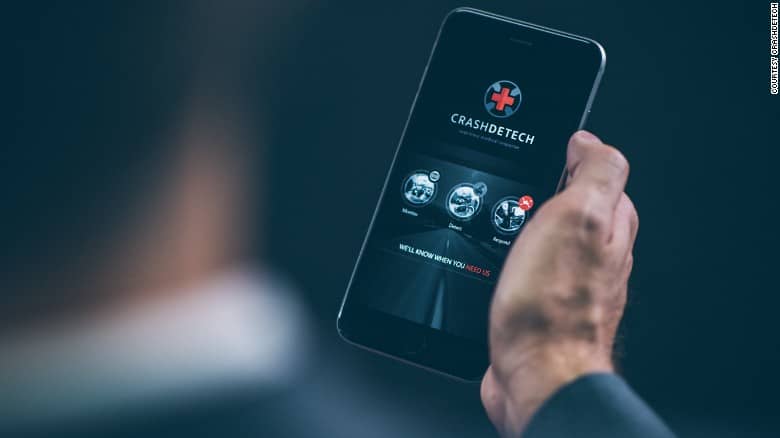 A Car Crash is a universal killer that annually takes more lives than most forms of cancer and conflict. Every 30 seconds, someone dies in a road accident according to a report by the Global Road Safety Partnership which translates to more than 3,400 people every day and about 1.25 million people every year.

World Health Organization (WHO) analysis is even more daunting, stating that 90% of all deaths in road accidents occur in developing and third-world countries, although these countries have only 50% of the vehicles in the world. This problem is so threatening the United Nations have declared the decade of 2011 – 2020 as the “Decade of Action for Road Safety,” and has more than 100 nations promising to reduce road fatalities.

CrashDetech is a South African company based in Johannesburg has designed a smartphone app that can detect when a car crashes. It is the brainchild of entrepreneur Jaco Gerrits and it works by detecting the sudden motion plus the G-force of the car crash while the user is driving.

After the automatic detection of the crash, the app then pinpoints the accident location and places a call to an emergency response centre. The centre will then dispatch a medical responders’ team nearest to the crash location. CrashDetech will also send the medical information of the victim to the paramedics like blood group and allergies, to allow quicker treatment. This process reduces the waiting time for emergency and consequently will save numerous lives.

“It’s a major global public health problem,” Gerrits said while talking to CNN. “They [the WHO] have identified that how quickly you respond to a crash and how effectively obviously can make a massive difference.”

“Let’s say in a rural area you’re involved in a crash and you’re off the road. There’s a good chance that nobody might even notice the crash. You can’t speak for yourself, and those patients will probably never get the right kind of treatment to them in time.”

Another key feature of the app is that it has a database of 113 different emergency medical services in South Africa. This means that the victim has a better chance of getting a response from an ambulance that is near.

“You might be familiar with one specific [ambulance] number, for example ER24, [but] there’s a good chance they’re half an hour away. Whereas let’s say Netcare 911 might be 5 minutes away.” Gerrits said.

How he did it

Gerrit developed CrashDetech’s technology using the revenue from his 14 years of work and previous successful ventures (e.g. Thembela). He estimated that the research and development would take him six months but it actually took him about three times of what he had anticipated. After 18 months, his hard work paid off:

“If you brake harshly or drop your phone, we don’t want to be sending ambulances left right and center,” said Gerrits. “So technically, that was quite a challenge to eliminate.”

Gerrit says that although the app is currently operational in South Africa only, he is in negotiations with potential partners including Uganda, Zambia, Guatemala and Australia and has plans to extend the app to U.S. as well.

But first, he wants to improve things at home as:

“The sad reality is that only 17.5% of our market has access to medical aid,” said Gerrits.

He wants to formulate a new subscription plan that especially helps those South Africans that don’t yet have health insurance. This app, if it works, will help save thousands of lives across the globe.

Watch the video below for details.