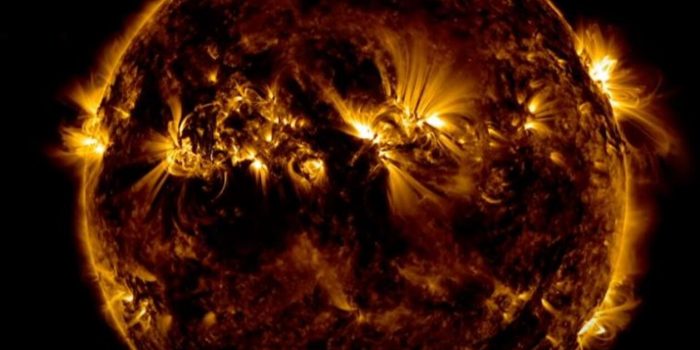 The images are from the Solar Dynamics Observatory (SDO) which is a spacecraft launched in 2010 as part of NASA’s Living With a Star (LWS) program. It is expected to be of service till 2030.

The images in the movie were captured 108 seconds apart in the extreme ultraviolet wavelength with the SDO’s Extreme Ultraviolet Variability Experiment (EVE). The SDO is in a geosynchronous orbit 22,000 kilometers (13,670 miles) above Earth, and the Sun revolves every 27 days, creating an ever-changing view of the star’s surface.

Each day, the SDO captures around 70,000 images. A paper published in Nature in 2017 compiled all that data into a single repository and described it as “… one of the richest and biggest repositories of solar image data available to mankind.”

A lot is happening in the Sun, and its activity affects Earth.

NASA’s LWS program plans to understand the Sun better, so we are able to predict powerful space weather that can damage satellites, power grids, and other infrastructure.

A white paper explaining the mission said, “SDO will determine how the Sun’s magnetic field is generated, structured, and converted into violent solar events that cause space weather.”

In 2018 NASA launched the Parker Solar Probe. In 2020, the ESA launched its Solar Orbiter, which will take the closest-ever images of the Sun and study the star’s polar regions.

With time, space agencies are becoming more advanced. This will help us prepare better for incoming weather changes, both from the moon and sun.