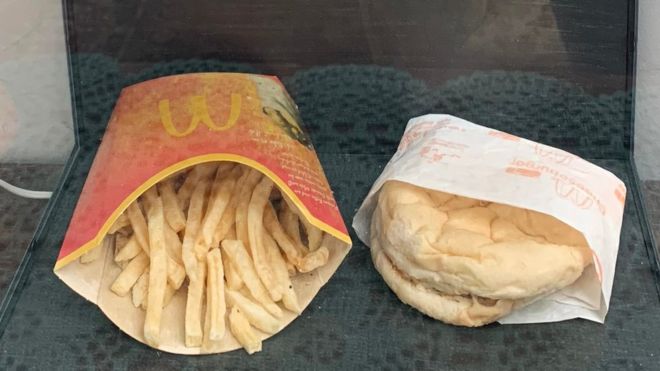 McDonald’s closed all of its restaurants in Iceland back in 2009. It was then that a man decided to purchase his last hamburger and fries from the famous food chain. Hjortur Samarason told AFP, ‘I had heard that McDonald’s never decompose, so I just wanted to see if it was true or not.’

Last week concluded 10 years since the indestructible meal was bought, and it still barely looks a day older. Those who want to observe can actually tune in to a live stream of the burger and fries from the current location in a glass cabinet that is located in Snotra House – a hostel in southern Iceland.

The hostel’s owner Siggi Sigurdur told BBC News, ‘The old guy is still there, feeling quite well. It still looks quite good, actually. It’s a fun thing, of course, but it makes you think about what you are eating. There is no mold, it’s only the paper wrapping that looks old.’ The hostel has claimed that people come from all over the world to visit this indestructible burger, and the website is receiving 400,000 hits on a daily basis.

During this decade, the burger and fries have been moved around quite a number of times. During the first stage, they were kept in a plastic bag in his garage. After three years, he saw very little change in the composition of these food items. He then donated the meal to the National Museum of Iceland. A museum specialist finally decided that the museum was not equipped for the preservation of food, and it was returned to the original owner. Mr. Smarason commented, ‘I think he was wrong because this hamburger preserves itself.’

After spending some time in a different hostel by the name of Reykjavík, the meal was moved back to its current home. The burger and fries have sparked discussion on social media. One Twitter user said, ‘The health teacher in our high school did this, but just left them on a shelf. He would point out how even after years, they didn’t grow mold because apparently there weren’t even enough nutrients in it for microbes.’