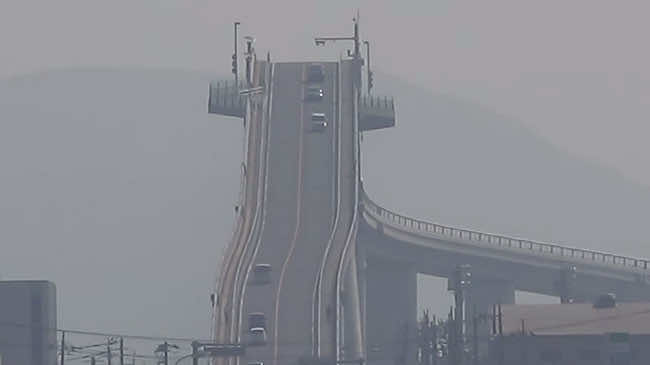 So you think zooming on flat roads at high speed makes you a brave driver? 50 bucks say I prove you that’s not the real deal. Try crossing this steep two-way bridge instead. All other bridges you have tried would seem child’s play after this. The height, the swaying, the narrow road, the incoming opposite traffic and steepness of the slope make this a nightmare for daily commuters.

Take a look at it. Yes, those cars are coming from the opposite direction. This is the Eshima Ohashi bridge in Japan. It connects the two cities of Matsue and Sakaiminato and bypasses the lake Nakaumi in between the two dwellings.

The cars are almost bumper to bumper and would you just look at the steep incline? If an opposite car is overtaking you, you might not even see it coming. The long line of cars trailing behind you at high speed will make sure that the accident triggers a chain of accidents. The bridge rises 44 meters into the thin air in this steep climb. Afterwards, the bridge goes downhill to almost same height as before. Why had it to be so high? Well, the ships pass through this bridge and with the necessary clearance in mind, the height came out to be this much.

From below, the bridge appears like this. The slope doesn’t seem that much from this angle. The drivers experience steep gradient because of their proximity to the base of the curve. In reality, the bus isn’t retardedly steep, it is just somewhat steep. The surrounding scenery of the bridge is very picturesque and beautiful, but, the narrow width and the two-way traffic ensures that you won’t be able to stop and do some scenic photography. This is Japan, remember? People value time here.

The bridge is more of a Joyland joyride than your average drive on an expressway, don’t you think?

Take a look at the video below: