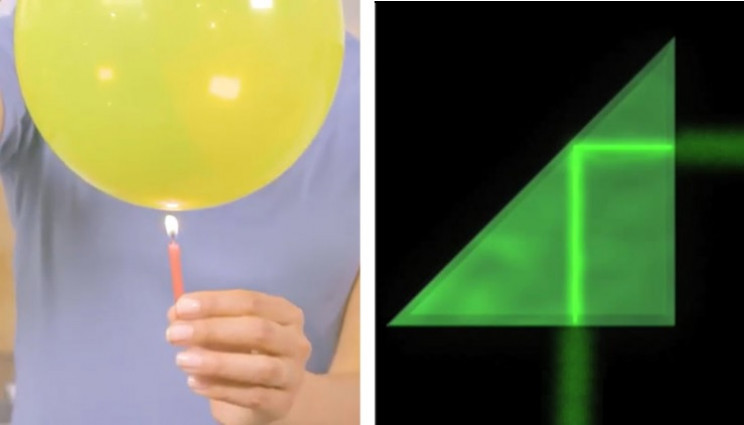 The first among the list of our physics experiments is a fireproof balloon. You need to fill the balloon up to three-quarters using water and then blowing it up with air as far as it will go. Tie it up afterward and ta-da! Now you can light a candle and lower the balloon over it; it won’t go out with a bang.

This happens because water can absorb heat and doesn’t allow the latex to get heated. However, once the water can’t absorb more heat; the balloon will pop.

The second among the list of our physics experiments is a lava lamp. You will need food coloring, vegetable oil, salt, and a big glass jar. Fill the jar up to 2/3rd using water and then fill the remainder using vegetable oil. Now add food coloring and then slowly add one teaspoon of salt into the glass jar. You can now observe as colored orbs of oil start to fall to the bottom of the container gently.

The oil stays on top of the water because it is lighter as opposed to water. However, salt binds to the oil and makes it heavier, thus making it fall. Once the salt gets dissolved in water; the oil will rise up again.

Growing Crystals Is Among The List Of Fun Physics Experiments

This experiment will run for a couple of days, but it is definitely worth the wait. You will need distilled water, salt, a pipe cleaner or a piece of wire, and a glass container. Start by heating the distilled water to the temperature where it is just below boiling. Now fill up the glass container to half using the hot water. Add a large amount of salt to the water and then stir well.

For the next step, you need to make a loop in the wire or pipe cleaner and then lower the wire into the mix. Have the glass container placed in a warm spot, and then you need to wait. Within a few days, you will be able to see salt crystals forming on the wire loop.

You will need a minimum of ten large popsicle sticks, a couple of rubber bands, a pair of scissors, and some marshmallows that will be used as cannonballs. Stack eight popsicle sticks and be sure to hold them together using rubber bands at each end. For the remaining two sticks, make use of the scissors for making a small notch on each side. After creating the notch, place the two sticks together and rely on a rubber band for holding the sticks together at the notch.

Now have the two sticks pulled slightly apart and have the eight-stick bundle slide between them. Using one hand, steady your new catapult while using your other hand for placing a marshmallow on the top stick. Pull it back, aim, and release!

If you can get your hands on distilled water and clear gelatin; you can form a basic version of the prism. Have a packet of gelatin emptied into a pot and then only add half the amount of water that is shown in the instructions on the gelatin packet. Warm the pot on the stove and while heating it, continue stirring the gelatin gently for dissolving it. Once the gelatin has been dissolved, have the mixture placed into a small container and allow it to sit for about 30 minutes to cool down. Now cut the gelatin into prism or square shapes and shine a flashlight through the gelatin to witness the light breaking up into different colors!

All that you need are two empty 2-liter soda bottles, a metal washer with an opening that is smaller as compared to the mouths of the bottles, and duct tape. Fill up one of the two-liter bottles about 2/3rd using water.

Now have the washer placed on top of the filled bottle and then have the empty bottle placed on top of it upside down. Tape the two bottles together and flip them quickly. Soon enough you will see a water vortex (also known as a whirlpool) forming as the water makes its way from one bottle to the other bottle.

You will need a potato, a galvanized nail, a copper coin, a voltmeter, and two alligator clip leads.  The galvanized nails have a zinc coating, and they can be purchased from any hardware or home improvement store. Do make sure that you are using a fresh potato since the experiment relies on the juices that are inside the potato. This is among the list of most amazing physics experiments.