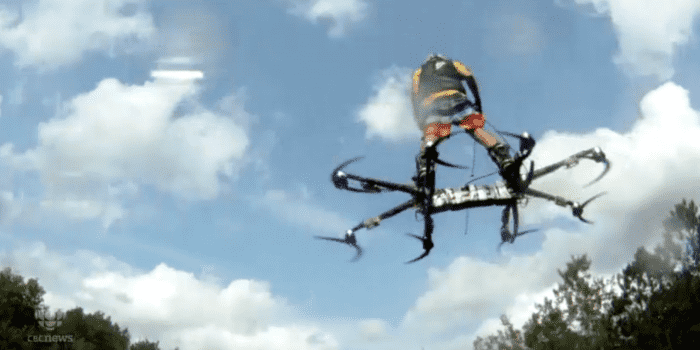 For the last three decades, a generation of engineers and movie fans have been waiting for something extra-ordinary: a hovering skateboard like the one in “Back to the Future Part II.”  What if I tell you such a toy does exist? Exciting, no?

The hoverboard comprises a frame with eight rotors and a simple hand throttle made out of modified pliers designed by Hunter Kowald, a YouTuber and content creator.

“It’s pretty much all you need for the control,” Duru told DroneDJ’s Scott Simmie. “It’s the thrust level.”

This world record-bearing fascinating toy is deprived of a genuine flight controller. It also lacks automatic stabilization and a gyroscope or accelerometer.

Arduino electronics is used to keep trace of throttle inputs and communicate with the machine’s electronic speed controllers (ESCs) as far as the fight controller is concerned.

In comparison, Hunter Kowald says his piloted drone, or hoverboard, took “a global effort of custom part manufacturing” to make a reality.

“It’s the simplest thing you can imagine,” Duru said in an interview with DroneDJ. “Really. It’s your body that does the balance. Our brains can learn so many things, and it learns this as another skill. It’s not even that difficult.”

Another good news is that Duru intends to make mass hover boards in the years to come.

Duru discusses his Guinness World Record for the farthest flight on a hoverboard, set at 905.18 ft (275.9 m). the video is shown below

He aspires to build a more commercial version of hoverboards ‘Omni Hoverboards’ website says, “stay tuned for our customer version.”

In the interview, Duru talked about the commercialization of hoverboards but didn’t seem to reveal much information about the idea. Though he said that his hoverboards “will turn into a product that’s usable for real. Not just you’re looking at these guys with jetpacks and thinking this is great, but this is crazy. I really think that here we have something that’s not too crazy.”

A few tech hurdles still need to be overcome. Power is a big challenge. Hoverboards need a lightweight power system that lasts long enough for the vehicle to be useful. Of course, safety concerns are major issues a well.

According to Duru, maybe the product’s target market would either be pilots or individuals with a flying experience. This gadget clearly is not something you would use to go to your local store. The company intends to market the product as an intense sports tool or for emergency purposes. For instance, they might be used to inspect bridges or a rescue vehicle to pluck people from dangerous floodwaters.

Watch the entire interview over at DroneDJ, as well as focus on Duru flying his hoverboard at the 2017 Taça de Portugal football cup final below.