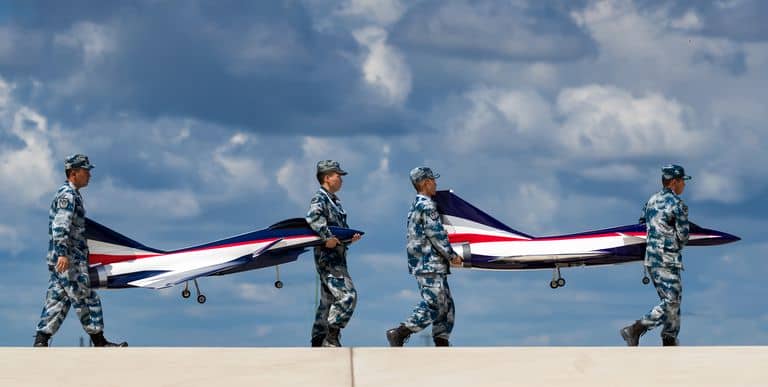 China’s efforts of becoming a global superpower have led it to expand its military as well. Considerable investments have been made in military tech, first overseas military base, and a more capable Navy than ever, China’s interest in becoming a military superpower is speaking for itself.

Peoples Liberation Army (PLA) turns towards other countries to get inspiration for its military. China tends to skip expensive and time taking R&D and tries to buy or steal foreign military technology. Here are a few of them.

The USA and Isreal partnership in the 1980s resulted in the creation of F-16, but due to increase in cost, US pulled out of this deal. American officials later discovered that Isreal had sold the development plans to China. The Chinese F-16, aka J-10, gave China an upgrade to its 1960s era fighters squad.

The fall of USSR in 1989 came out to be great for Chinese military as they took benefit of Russia’s crumbling economy and bought the designs for Su-27. China has developed and improved the aircraft to a great extent under the name J-11. In 2000, Russia sold China some advancements they had made in their Su-27 and China incorporated them in their J-16.

J-15 serves China as their carrier-based aircraft. The plane is originally a copy of Russian Su-33. Russia denied selling the designs of Su-33, so China approached Ukraine and bought a prototype dubbed T-10K-3. China has since made a lot of improvements.

CASC Caihong-4 and US MQ-9 Reaper

Even though, there is no evidence available for America’s claim that Chinese CH-4 is a copy of American MQ-9 Reaper. Despite being modeled after the Reaper, China promptly set off to further improve the model and created CH-5 which has more capabilities than its predecessor.

China did not stop at Russian Sukhoi design; It also purchased plans for MiG-21. The Chinese MiG is named J-7. Thanks to China’s access to F-16 and MiG-21, with a joint venture with Pakistan, China created JF-17. This plane continues to fly today and can compete with latest aircrafts decades after its creation.

J-31 is a project still under development and is said to be better than the aircraft it is copied from, The F-35. Again China is limited by its weak stealth technology but still has managed to offer a larger payload capacity.